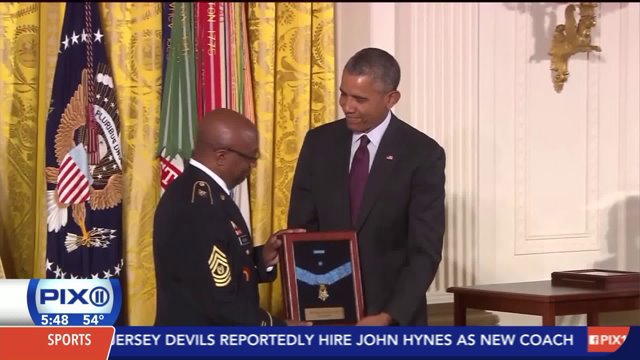 NEW YORK (PIX11) -- It's been nearly a century in the making, but finally one of New York's -- and the nation's -- most heroic soldiers has been fully recognized for the remarkable sacrifice he made for the freedoms of the country that denied him his due for so long.

Late Tuesday morning, Sgt. Henry Johnson, a member of the storied Harlem Hellfighters regiment, was awarded the Congressional Medal of Honor by President Barack Obama, just over 97 years after Johnson performed one of the most astounding acts of valor of World War I.

"America can’t change what happened to Henry Johnson," the president said to a capacity gathering in the White House, "but we can do our best to make it right."

With that, President Obama, through an act of Congress, righted a longstanding wrong.

"I think the phrase 'It's about time' is appropriate in this situation," said Max Brooks, author of the graphic novel Harlem Hellfighters. A major theme of his book is Johnson's under-recognized heroics.

"I think it's amazing, it's wonderful," Brooks said about Johnson finally being awarded the Medal of Honor. "I think it's never too late to honor a fallen hero."

Early in the morning of May 15th, 1918, Sgt. Johnson and fellow nightwatch soldier Needham Roberts were ambushed by a platoon of at least a dozen Germans, who tried to take over their whole unit, while their fellow American soldiers were sleeping.  With the butt of his backfired rifle, his bolo knife and his bare hands, Johnson took out the entire German platoon, after it had tried to take his then-unconscious buddy prisoner.

"Henry became one of our most famous soldiers of the war," said the president. "His picture was printed on recruitment posters and ads for Victory War Stamps.  Former President Teddy Roosevelt wrote that he was one of the bravest men in the war.  In 1919, Henry rode triumphantly in a victory parade."

Because the U.S. government wouldn't let black soldiers serve in combat with the rest of the U.S. Army, Johnson's unit, the Hellfighters, were assigned to fight under French command.  The French awarded Johnson the Croix de Guerre, its highest honor.  The U.S. would not do the same, until Thursday.

Accepting the medal in Johnson's honor was the highest ranking enlisted member of the New York Army National Guard, Command Sgt. Major Louis Wilson.  Johnson's son, Herman, himself a highly decorated Tuskeegee Airman, died before he could see his father bestowed with the honor he had so deserved.

"The family never gave up on the hope and promise of America," said Michael Mowatt-Wynn, president of the Harlem and The Heights Historical Society, which has championed Johnson's cause for decades.   "I was overwhelmed," Moeatt-Wynn said.

The community from which the Harlem Hellfighters got their name, and which launched Johnson and the regiment into war, and then welcomed them home as heroes, was on Thursday afternoon reveling in the justice carried out earlier in the day in Washington.

"We've always known that we have proud, courageous men and women within our race here," said Mowatt-Wynn, "but now, it's just being recognized, not just regionally, but nationally and worldwide."