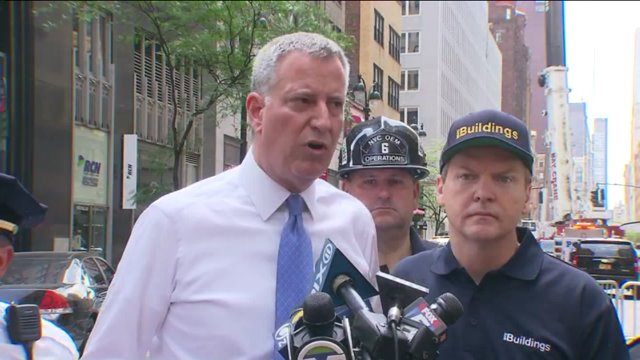 A crane`s cable snapped while carrying a 4-ton air conditioning unit to the top floor of a 30-story building in Midtown. 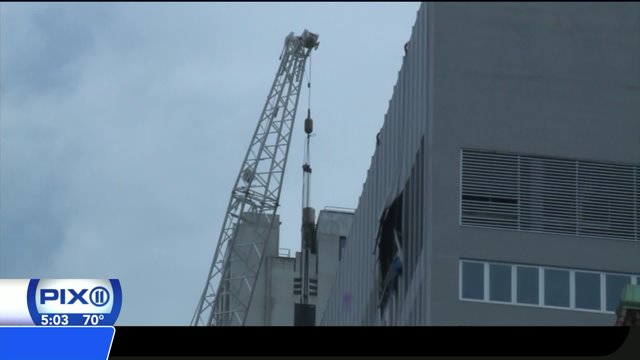 MIDTOWN (PIX11) -- A 4-ton air conditioning unit plunged 30 stories after it snapped off a crane, striking a midtown building and injuring 10 people on the ground.

The accident happened at East 38th Street and Madison Avenue Sunday at 10:43 a.m., sending the heavy unit to the ground after it slammed into the 30-story commercial building made out of steel and fiber glass.

Falling debris hit a car with a woman sitting inside on the driver's side. A group of traffic agents in the area also narrowly missed getting hit, officials on the scene told PIX11 News.

No life-threatening injuries have been reported. Ten people have suffered minor injuries, Mayor de Blasio said in a press conference, adding that it was fortunate the accident happened during a time of minimal foot traffic in the commercial area. The injured consisted mostly of pedestrians and construction workers.

The facade on the building is loose, and there is a lot of debris on the street, authorities said. There was also a water main break at the location, the FDNY confirmed.

A large emergency response surrounded the location. Crews urged people to stay away from the area as they secured the crane.

Officials said this type of work is typically done on Sundays, when the city is less crowded.

Pieces of the building shot into building across the street shattering windows @PIX11 News http://t.co/GHxda3nmmn—
Ellyn Marks (@MarksPIX) May 31, 2015