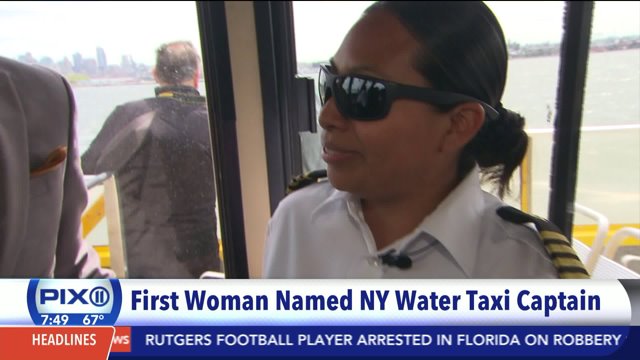 (PIX11) -- Born and Raised in Bushwick, Brooklyn, Juana Garcia is all smiles for a good reason.

Garcias, 26, has made history becoming the NY Water Taxi's first female captain, something the 14-year-old company has yet to see.

"It's hard to become a captain as a female," Garcias said. "You have to prove you can do what the guys can do and earn their respect."

Garcia has worked for the NY Water Taxi for the past eight years, working her way up from the concession stand to deckhand all while going to night school to become a captain.

The 16 other captains are all men, which Garcia said isn't a surprise since it's a male-dominated industry.

"Men have their own pride and own plans in life," Garcia said. "They'll say, 'Oh, she's just a girl. Why would she want to have such a big responsibility?'"

Garcia said it wasn't easy, going to school while she was pregnant with her second child. She credits her husband for pushing to her to keep going.

As for the job, she said the hardest part is handling the 149-passenger boat in choppy waters.  However, she says she doesn't get sea sick and loves seeing the different faces taking in the various sights of the city.

So, what's next for this go-getter? Garcia said she dreams of becoming captain of a much larger boat: the Staten Island Ferry.