How Bed-Stuy residents are combating garbage littering their streets 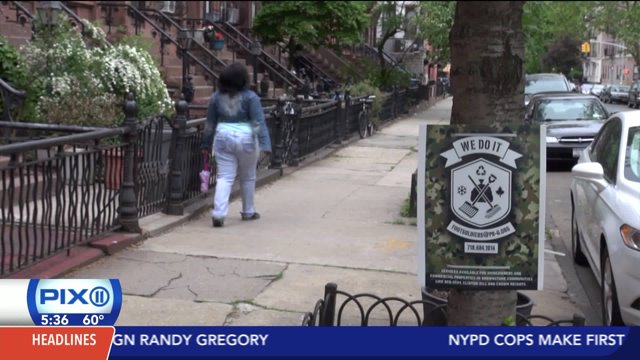 BED-STUY, Brooklyn (PIX11) -- When it comes to litter, Alexandra Larger says she understands how candy wrappers, cigarette butts, and empty soda cans end up on the street, but seeing chicken bones and rubber gloves littering the blocks near her home in Bed-Stuy just never made sense.

So now she's started documenting the sightings on her blog "Streets of Brooklyn."

"I can’t recall ever seeing anyone eating a fried chicken thigh in the middle of the street - can you? And as far as the rubber glove situation … I don’t even want to know," Larger writes on her blog.

Larger says she never notices garbage like this popping up in wealthier neighborhoods around the borough. So she decided to start snapping pictures of the unusual sightings and posting them online.

"I have no doubt in my mind that this phenomenon is enmeshed in politics of class and race. In a way, this Tumblr is meant to bring awareness to this fact, and hopefully even incite some change," she writes.

"It upsets me because then I have to come out and clean it," said community gardener Jane Sandoval.

Sandoval is one of the gardeners at the Halsey community garden. Before she and the other members cleaned it up, she says the lot was a dumping ground for people from all over the borough.

"If they have too much they would just go to every home and dump some," said Sandoval. "You come out and you know you didn't put out all that garbage."

Considering all the illegal dumping, Sandoval says she thinks sanitation does a great job keeping the streets clean. But she doesn't understand how some people can be so inconsiderate. Just the other day she found a condom on her sidewalk.

"I had to pick it up. I live there. It was right in front of my house."

A few blocks away I found Floretha Brown sweeping her own sidewalk. Brown's block is one of the most pristine, tree-lined blocks in the neighborhood.

Brown says her street is so clean thanks in part to the block association. "We come around and look and make sure that our block is clean," said Brown.

And when she does see trash, rather than take pictures, Brown says she and her neighbors take action.

"So when we see things, we don't wait for the person that owns it. What we would do is we see it, we pick it up, and stuff like that, ourselves."

Larger says she hopes her pictures will make people take a closer look at the trash they do or don't see around them in different neighborhoods throughout the city.

And she wants her readers to draw their own conclusions from there.