‘Kill him!’: Riot charge for man who allegedly egged on violence at Brooklyn McDonald’s 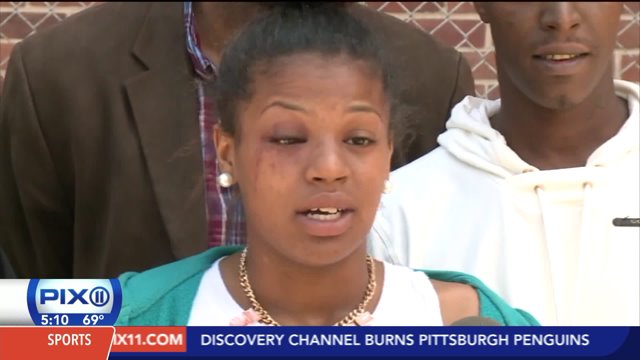 She says she has no idea why a mob of teens beat her, along with a good Samaratin inside a McDonald`s

BROOKLYN (PIX11) -- Marking the third arrest connected to a violent brawl that started allegedly when a 16-year-old girl attacked another teen at a Brooklyn McDonald’s, a man has been taken into custody on suspicion of urging further violence against a well-intentioned stranger who tried to break up the girls’ fight.

It happened about 1 p.m. May 14 at a McDonald’s located at 395 Flatbush Ave., a popular spot for teens in the neighborhood to hang out after school. A girl began attacking the victim -- identified as 17-year-old Elizabeth Ballinger -- inside the fast food restaurant. When a 43-year-old bystander stepped in intent to break up the fight, the crowd turned on him and started beating the would-be do-gooder, police said.

Disturbing video of the melee was posted online. In it, a voice can be heard egging on the group attacking the man.

Amir McCants, 24, faces a charge of riot in the first degree in relation to the fight, police said Tuesday. Investigators sent out a picture, embedded below, over the weekend of a man they were looking for for allegedly inciting a riot. McCants was taken into custody about 9:30 p.m. Monday.

Police released this photo of a man suspected of inciting a riot by urging attackers to "Kill him!" as they turned on a man who tried to break up a fight between two girls at a Brooklyn McDonald's on May 14, 2015. (Photo: NYPD)

An NYPD spokesman could not confirm exactly why McCants was arrested, but in the widely circulated footage, a man can be heard in the background yelling “Kill him!” as the violent group turned on the stranger who tried to break up the initial fight.

At a news conference shortly after the brawl, Ballinger said she has no idea why she was attacked. And her parents said they were disgusted by what happened to their daughter -- and especially by how those around her reacted to the violence.

“I was devastated,” the victim’s father, Richard Zimmerman, said. “I was very, very, very traumatized to see my little baby getting jumped like that and nobody helping her but a civilian -- and he got hurt.”

In addition to McCants’ arrest, two others have been charged in the case.

The day news of the fight broke, McDonald’s told PIX11 News it is working with police and the community to find those who joined in the fight.

It's the latest case of violence breaking out at a city McDonald's, particularly involving young people. In March, a group of teens attacked a 15-year-old girl inside a McDonald's.

Police are looking to speak with this person on suspicion of taking part in an attack against a 43-year-old man who tried to break up a May 14, 2015, fight between two teen girls at a Brooklyn McDonald's. (Photo: NYPD)

Police are still looking for several attackers who beat up the 43-year-old man, officials said Saturday. They released a photo, embedded above, of one suspected culprit who was wearing a grey hooded sweatshirt and a light colored backpack with pink coloring at the time of the attack.

Anyone with information is urged to call NYPD’s anonymous Crime Stoppers hotline at 800-577-TIPS.