Speed of derailed Amtrak train ‘strikes me as being too fast’: Penn. governor 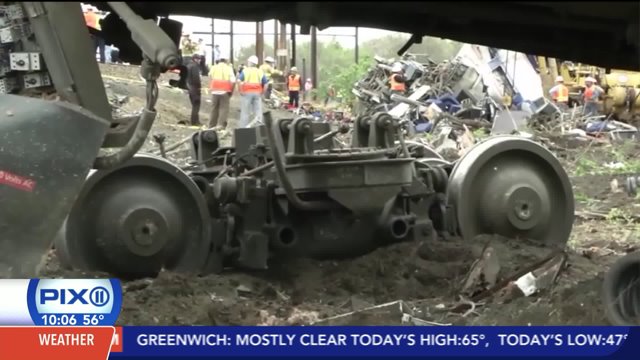 PHILADELPHIA (PIX11) -- As night approached and the media swelled in the shadows of the special lights brought in to allow NTSB investigators to forge ahead with their probe into the deadly crash, Philadelphia Mayor Michael Nutter made it clear that they are still trying to get the facts regarding passengers that were on Amtrak 188.

"This work is not anywhere close to being over and we are committed to see it through," he said.

"We are still trying to figure out some of the discrepancies between the manifest, who bought tickets versus who was actually on the train."

Pennsylvania Gov. Tom Wolf returned to the scene Wednesday night, when PIX11 News asked him about the overwhelming velocity leading up to the train jumping the tracks. The NTSB earlier in the day announced that the train was traveling 106 MPH going into the turn, double the rate than what it is the norm on the track

"That's too fast," Wolf said. "It strikes me as being too fast."

As focus turned to the engineer and exactly what he was doing leading up to the deadly turn, NTSB board member Robert Sumwalt admitted during an early evening news conference that NTSB investigators have yet to speak with the engineer.

"The answer to that is no but we plan to," he said. "This person has gone through a very traumatic event," adding that it is a high priority to talk to the train crew.

While that may be a priority for the NTSB, a bigger priority for the rail industry as well as members of Congress is one that has taken years to implement, positive train control. Although mandated federally, it has not been installed as quickly as hoped for rail experts and members of congress. It is important to note considering what it does and potentially could have prevented, according to Sumwalt.

"Based on what we know, we feel that had this system been installed on this section of track this accident would not have occurred," he said.

As the investigation entered a new day on Thursday, Temple University Hospital announced that they were treating 16 patients, down seven patients from the day before. Eight remained in critical condition. The hospital added that they expect all of their patients to improve and that all are accounted for.