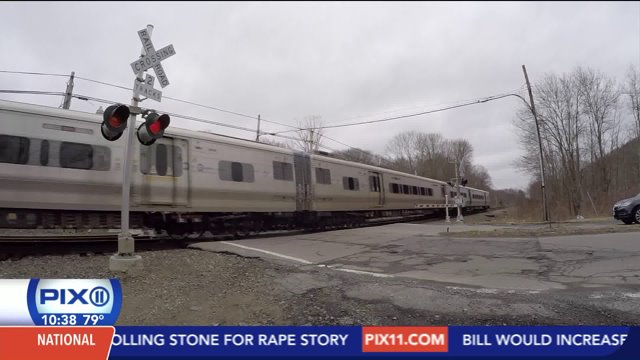 VALHALLA, N.Y. (PIX11)-- Reflecting on what the future might have been like is simply too challenging for Alan Brody.

"This would have been our silver anniversary," Brody said, referencing his marriage to Ellen Brody, who died Feb. 3 when her SUV collided with a Metro-North train.

The wounds from that night are the kind that will never heal. Brody's wife was the driver of the Mercedes SUV that became trapped on the tracks as a North Harlem Line train barreled toward it at about 49 miles per hour, according to the National Transportation Safety Board. The collision ignited a fireball and damaged an estimated 480 feet of the third rail. As a result, 400 feet of the live 700-volt electrified line was forced into the first car. A total of six people perished in the fiery crash.

Remnants of the fatal collision remained at the Commerce Street crossing for weeks. It is a crossing that Alan Brody, a former train conductor in his native South Africa, describes as "a trap. Basically, a death trap."

He is not alone.

In 2009, the New York State Department of Transportation earmarked $126,000 in federal money targeted for the potential implementation of additional warning lights for drivers approaching the curve into the Commerce Street crossing. After the crash, a state DOT spokesperson said the lights would not have made a difference in this tragedy because the lights were to be 200 feet from the crossing. PIX11 News asked the state DOT about what happened to the $126,000?  A state official said not one cent of the money has been spent.

The Federal Railroad Administration has been for years aware of the potential dangers at the crossing. Last year, the Office of Safety Analysis Highway-Rail Crossing Safety & Trespass Prevention released a report listing the Commerce Street crossing as having a predicted collision rate of 3 percent per year. That ranks as one of the highest in Westchester County. It should be noted that it was the FRA's own computer model -- the Web Accident Prediction System -- that produced the predicted collision rate of  3 percent.

"It's unacceptable. Any percentage is unacceptable because it means somebody is going to be killed," Andrew Maloney, an attorney with Kreindler and Kreindler in Manhattan, said of the report.

Maloney, who has argued before the nine Supreme Court Justices, has vast experience with transportation incidents. While he is not representing Brody, he is seeking millions on behalf of 12 passengers who survived the February inferno in the train's first car.

"That crossing is unsafe," he said, summing up Commerce Street in four words.

According to the FRA, the Roaring Brook Crossing a few miles up the road has the same accident probability rate as that of Commerce Street.

However, unlike at Roaring Brook, there are no warning bells at the Commerce Street crossing to alert those nearby of an oncoming train. The railroad sign going into the crossing appears blocked from a driver's perspective, even when the trees have no leaves. Meanwhile, a post that stares directly into oncoming traffic, where a railroad sign can be placed, stands empty.

"Not at all, those are easy to do and not expensive and should be done right away," Maloney said.

In recent years, the FRA has issued Emergency Orders to eliminate the immediate hazard of death as well as personal injury after accidents. Five days after the deadly Hudson line train derailment, the FRA put out an emergency order that impacted certain areas of the Hudson line. The agency confirmed to PIX11 News that no orders were issued following the Valhalla crash.

Less than 24 hours following the Valhalla tragedy, NTSB Board Member Robert Sumwalt promised a full and detailed report about the incident.

"By the time we've completed this investigation, we will know everything that we need to know," he said at a news conference at the time.

Sumwalt even requested that anyone with any information on the crash to email investigators via a special witness email set up by the NTSB.

PIX11 News has learned from the first passenger who exited the train while he was on fire that the NTSB has not contacted him after he reached out to the agency. This email was sent by the passenger four days after the crash, from his hospital bed at Westchester Medical Center.

PIX11 News obtained phone records showing the passenger then called the NTSB on Feb. 13. As for what happened? The passenger says, "On the call, someone said they would get back to me for sure."

Maloney confirmed that his client has not had any contact nor have they interviewed him.

Additionally, PIX11 News has learned there are others in the first car who have not been interviewed. We informed the NTSB of our findings just over 24 hours prior to our report airing. The NTSB then sent us the following statement:

"One of the NTSB's goals in the Valhalla accident is to understand what happened in the first car of the train. Passenger interviews are part of that effort and are ongoing. The investigation is continuing and we expect additional passengers to be interviewed."

It was just last week that the Philip Russotti, the attorney representing Alan Brody, filed a notice of claim seeking monetary damages. He describes the crossing simply as "extremely hazardous."

For many, it was just that on the night of Feb. 3 and it remains that way to this day. Brody said he has visited the site several times since the deadly crash and like others, he has a hard time trying to comprehend as to why nothing has been done.

"As far as I can tell they haven't changed anything," he said.

When asked how does it makes him feel?

"It makes me feel that something is deeply wrong," he responded.