Brian Moore, killed in the line of duty, posthumously promoted to NYPD detective 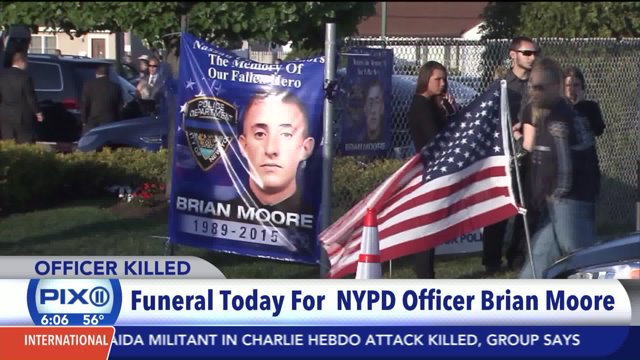 Police officers from around the country will dawn their dress blues forming a sea of grief to say goodbye to NYPD Officer Brian Moore. 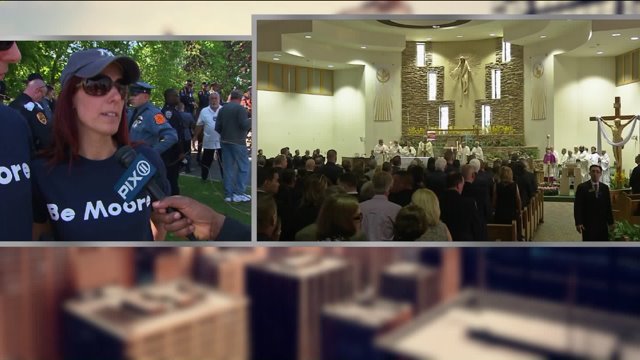 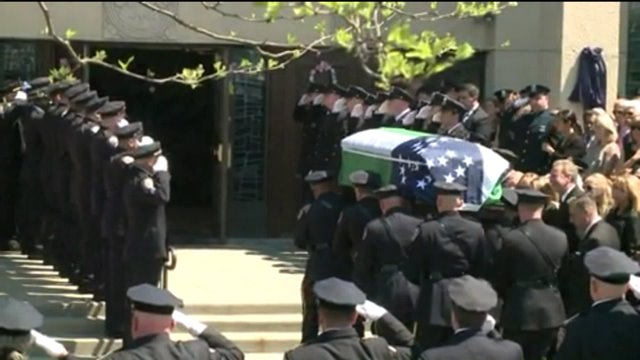 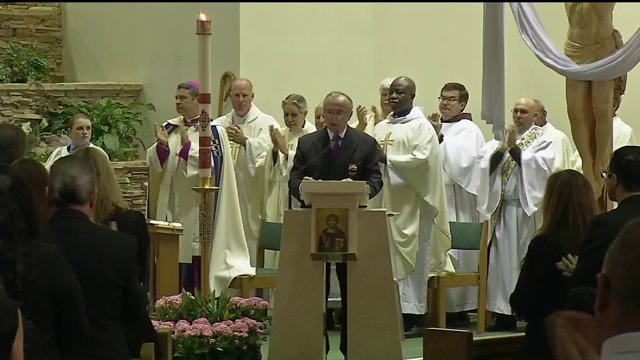 SEAFORD, Long Island (PIX11) -- It was a day of tears and appreciation, heartbreak and honor as thousands of mourners said their final goodbye Friday to a 25-year-old New York City police officer, who died days after a suspect he tried to stop in Queens pulled out a gun and fired multiple shots into his squad car.

A sea of blue spilled from Saint James Roman Catholic Church in Seaford, Long Island, where law enforcement from around the country joined family, friends, colleagues, neighbors and community members for the funeral of Brian Moore, posthumously promoted from officer to detective.

"With great honor and great sadness, I posthumously promote Police Officer Brian Moore, shield 469, to Detective First Grade of the New York City Police Department," Commissioner William Bratton said, with tears in his eyes and his voice quavering. The promotion was met with a standing ovation.

Moore had been on the force for barely five years when he was killed in the line of duty. Police Commissioner William Bratton said in his short career, Moore "had already proved himself to be an exceptional young officer."

Although he was young, Moore had reached the elite anti-crime task force, effected more than 150 arrests and had been decorated many times. Moore came from a family of law enforcement. He was the son and nephew of retired NYPD sergeants.

Moore's joining the force "exemplifies the notion of bleeding blue," Bratton said at the funeral Friday. "All cops bleed blue. We say that, while hoping it never comes true."

As early as middle school, Moore knew he wanted to follow in his father's footsteps and become a police officer.

"He just couldn't wait to be old enough to join the force," Mayor Bill de Blasio said at the now-detective's funeral.

Shirts emblazoned with the phrase "Be Moore" dotted the crowd outside the church.

"Be more like Brian, be a hero, be respectful," a neighbor said of the slogan. "Brian is gonna be missed by so many and it's such a beautiful tribute to have all these people here."

Moore and a partner were in plainclothes and traveling in an unmarked car in Queens Village on May 2 when they pulled alongside a man who was "walking and adjusting an object in his waistband," NYPD said.

When approached by the officers, the pedestrian reached into his waistband and pulled out a weapon. He fired multiple shots into the officers' car. Moore, who was sitting in the driver’s seat, was struck in the head. His partner, Officer Erik Jansen, was not injured.

"Both officers were still seated in the vehicle and did not have an opportunity to get out or return fire," the police department said.

After allegedly opening fire, Demetrius Blackwell ran from the scene. With Moore mortally wounded behind the wheel, Jansen radioed for help and a manhunt began. It ended 90 minutes later when Blackwell, 35, was taken into custody inside 104-25 212th Place, NYPD said.

Moore was rushed to a hospital in critical condition. He spent two days in a coma before he was taken off life support Monday, marking the third time an NYPD officer had been killed in the line of duty in the past five months.

Blackwell originally had been charged with attempted murder but those charges were upgraded to include first-degree murder in the wake of Moore's death.

Police said Blackwell has "an extensive arrest history" and detectives believe the gun he allegedly used to kill Moore had been stolen in 2011 from a bait and tackle shop in Georgia. The weapon was discovered in a backyard shortly after the deadly shooting.

It was the third time since December that an NYPD officer was gunned down while on patrol.

Posthumously promoted to detectives as Moore was, Rafael Ramos and Wenjian Liu were killed "execution style" Dec. 20, 2014, while they waited at a stoplight in the Flatbush section of Brooklyn, allegedly by a man vocal about his disdain for police officers and who turned the gun on himself after shooting the pair.