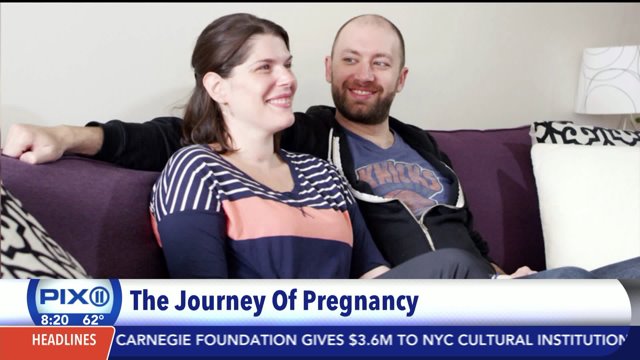 (PIX11) -- A little more than a year after his wife died from a rare form of cancer, Max Joice is still grieving the loss of Liz Joice, the subject of an emotional and intimate documentary that chronicled her pregnancy and illness.

“We had a lot of faith in Liz’s ability to fight, ... maybe foolishly so,” Max Joice recalled.

The couple met and married in two years, after Liz was diagnosed with Sarcoma. Her aggressive treatment saved her life, but took away her chances of ever giving life to another.  Or so doctors told her.

Liz defied the odds and soon became pregnant with a growing little girl, Lily, who is now 15 months old.

But just a month after Liz and Max conceived, the cancer returned and with it came inconceivable choices of how to treat it. They decided to wait and watch, delivery baby Lily then treat the disease.

Unlike other couples suffering through cancer alone, the Joices' life and pregnancy were chronicled in this documentary "40 weeks," by filmmaker Chris Henze , who shot extra footage for the Joices knowing they may loose Liz -- and thus lose Lily's chance to know her mom.

As the second Mother's Day without mom approaches, Max made the bittersweet decision to watch the videos of his family in a more hopeful time, to share the joy of Liz with baby Lily.

"Eventually, it's a great way for he to get to know her mom," Max said of the footage, while wiping away tears.

Henze, who grew ever closer to the family during the filming, has vowed each year will bring a new Mother’s Day gift as well.

"We’re editing pieces for Lily to watch that will bring her mother into her life as she grows," the filmmaker said.

This weekend, there will be a memorial walk to honor Liz's memory and raise money and awareness for Sarcoma.