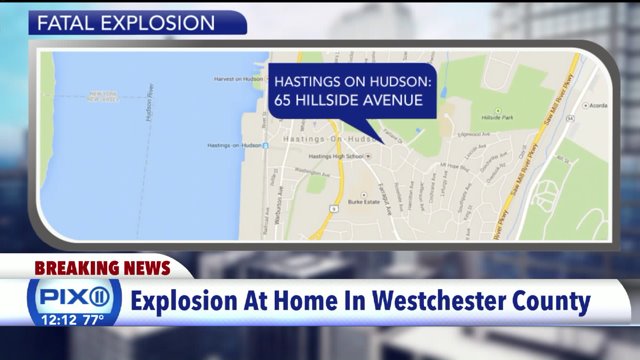 HASTINGS-ON-HUDSON, N.Y. (PIX11) -- Two workers were killed Thursday in an explosion during the excavation of a backyard fuel tank, the mayor a New York City suburb said.

It happened Thursday morning behind 65 Hillside Ave. in Hastings-on-Hudson (map). That address is located behind the campus of Hastings High School and Farraugut Middle School, according to a map of the area.

An email has been sent to parents alerting them about the nearby explosion, a spokeswoman for Hastings-on-Hudson Union Free School District said.

"There has been an oil tank explosion at a home on the corner of Hillside and School Streets. All students and staff are safe. We will be keeping everyone inside while the situation is handled by local responders," the note read.

Hastings High School and Farragut Middle will have a normal dismissal time, officials say, but students will be dismissed through the front of the building only.  Parents picking up students must avoid Hillside and School streets.

Staff will be in place to keep students from wandering towards the scene of the earlier explosion at a resident’s home.

Aerial footage of the scene showed what appeared to be a mangled oil tank laying in the backyard of a home, hundreds of feet away from a large rectangular hole in the ground that may have once held that tank.

It is still too early to determine the exact cause of the blast, Mayor Peter Swiderski said.

No one else was hurt in the explosion and there was no damage to the house. Hastings-on-Hudson, which is north of Manhattan, is home to about 8,000 residents.