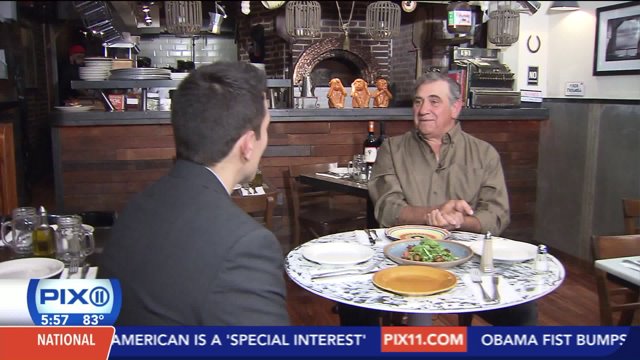 You may know Dan Lauria as the hard-nosed dad from the Wonder Years.  But lately he’s been burning up Broadway in hits like Lombardi and A Christmas Story.  Now he’s launching his own play Dinner With The Boys which takes a humorous look at the violence we consume everyday.

It's not often you get to make fun of the mob...and live to tell about it.
But Dan Lauria's new off-Broadway play Dinner With The Boys does just that.
He originally wrote the play for Dom DeLuise, Peter Falk, Charlie Durning, and Jack Klugman.

"I was trying to write something about all of the violence we're consuming on TV.  They're not even horror stories now, they're mutilation films," Lauria explained. "Dom said if you make something funny out of that, then you got something. [And] to this day I think the funniest lines are Dom DeLuise ad-libs and I take full credit for them."

"I'll tell you every broken nose in New Jersey was out there, that was for sure," he said. "But it's really a guys kind of play, kind of like Lombardi.  It's blue collar."

And after rave reviews, Lauria and producer Pat Addis decided to bring the show to New York.

"The one line I'll never forget, it was from the New York Times review. I got to admit, I give him credit.  He wrote it in the first paragraph he came here to hate this play and couldn't help laughing," Lauria remembered. "And then he said, the author obviously wrote this for the enjoyment of the audience.  I went duh... that's what we do right?  We write for the enjoyment of the audience."

Dinner With The Boys opened Monday at the Acorn Theatre and has no scheduled closing date.

Every Tuesday night the audience can actually have dinner with the boys after the play at Tony DiNapoli's. Lauria credits Addis with the idea.

"She says I want to do something for the audience, get the audience more involved," Lauria said.

Lauria says much of the play was inspired by his original Brooklyn neighborhood.

"I mention Gates Avenue, where I was born, I mention Atlantic Avenue," he said. "I'm gonna put Luzzo's in there, this great wonderful restaurant."

Lauria says the audience may find the humor a little uncomfortable at first...

"In the first 5 minutes they giggle, but they don't know," he smirked. "Then they realize it's a joke."