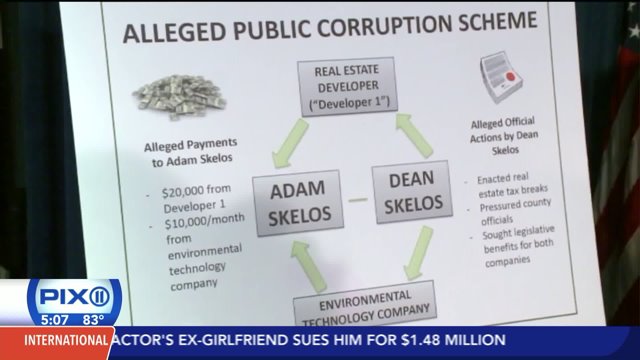 ALBANY, N.Y. (PIX11/AP) — Dean Skelos, the head of the New York State Senate, and his son have turned themselves in to authorities amid a federal investigation into the awarding of a $12 million stormwater contract on Long Island.

Skelos and his son surrendered at the FBI offices in lower Manhattan Monday morning. Investigators have presented a six-count criminal complaint, filed in U.S. District Court, against Skelos and his son. The charges include extortion and soliciting bribes and reference alleged behavior that dates back to 2010.

Skelos issued a statement declaring his innocence. Both Skelos and his son were awaiting an initial court appearance in Manhattan federal court.

U.S. Attorney Preet Bharara told a news conference Monday afternoon that the charges are more proof that public corruption is a chronic problem in the state.

Skelos became New York state's most powerful Republican official when he was elected in January as majority leader. He previously shared the post from 2011 to 2013. He joined the state Senate in 1984.

An FBI investigator working on the case said Skelos is accused of causing $200,000 to be paid to his son in exchange for "back-door bribes."

Skelos, 67, told reporters last week that he is cooperating with authorities and has hired an attorney, but had no intention to resign.

The United States Attorney Preet Bharara said Skelos is accused of pressuring a real estate developer to pay his son $200,000 for work he did not perform.

Skelos is also accused of pressuring an environmental technology company into paying his son thousands of dollars a month, threatening to block legislation and use his political power to hurt the company if they did not comply.

The probe focuses on whether Skelos influenced Nassau County's decision to award the 2013 contract to Arizona-based AbTech, which had hired Skelos' son Adam, 32, as a consultant.

The company said in a statement that it is cooperating with investigators and is not a target.

Bharara has called Albany a "cauldron of corruption." Indeed, the charges against Skelos and his son are only the latest significant case to emerge recently. Former Assembly Speaker Sheldon Silver, a Democrat, is fighting federal charges that he accepted nearly $4 million in payoffs.