Beyond the riots: Is there hope for Baltimore? A reporter’s notebook from that city’s streets 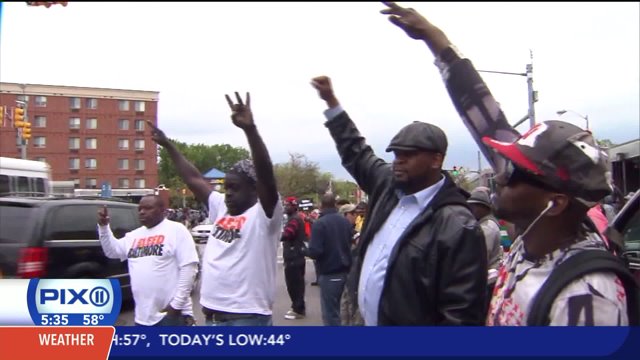 BALTIMORE, Maryland (PIX11) - After she found out that I'd been sent to cover rioting and unrest in Baltimore last week, a longtime friend who is from this city but now lives in New York told me that she'd called her mother last Monday, the day the rioting, looting and burning.   Her mother, who I've known for nearly 30 years, and who I'd be wrong describing any other way than caring, kind and well-informed, now lives in one of the city's wealthiest neighborhoods, albeit in a small house.

When she was able to reach her, she asked her mom how she was doing, and if she was okay.  Her mom responded, "What are you talking about?" not in disdain, but in complete honesty.  She had no idea about the rioting until her daughter had called her from 200 miles away, hours after it had erupted.

Her mother cares deeply about the situation now, but the anecdote underscores a big part of the problem here in Maryland's largest city.

It doesn't take a genius to see that the economic disparities in Baltimore are vast.   My satellite truck operator and videographer, who'd never been to Baltimore before this week (and, in fact are so smart and talented that I'd have to call them geniuses, but I digress) were stunned by the blight they saw, block after block, not just in the Sandtown-Winchester/Harlem Park neighborhood where Freddie Gray lived, but in a vast corridor five miles wide and nearly two miles long, stretching from East Baltimore, where we began our coverage last Monday night at a massive structure fire, to West Baltimore, where Freddie Gray was infamously arrested, and where we ended up doing most of our live reports.

New York mayor Bill de Blasio often talks about a tale of two cities in describing New York, but the two cities that make up Baltimore have a far wider and deeper canyon between them than the Big Apple does.

I don't always agree with Rev. Al Sharpton.  But when he said at a city faith leaders' summit in Sandtown-Winchester on Thursday that Monday's violence was the manifestation of "fifty years of [people] driving through these neighborhoods and turning a blind eye," I had to agree.

I've spent a lot of time in the Baltimore area over the last 30 years, but mostly in the northwest suburbs, with a family to whom I'm so close they lovingly included me in a family portrait they'd commissioned.  I also dated, off and on for years, a woman whose family lived in the artsy and well off Homewood neighborhood of the city, as well as in another northwestern suburb.  My memories of Charm City are so charmed that Baltimore remains one of my ten favorite cities, even though I've been fortunate to travel widely worldwide.

In full disclosure, however, my experience of Baltimore over all of this time has been very much what Rev. Sharpton described. My Baltimore has been the Inner Harbor and Fells Point, and Eastern Avenue, where Haussner's Restaurant boasted the world's largest ball of string in its basement.

The crime ridden neighborhoods that were the setting for the television series "The Wire" were not part of my map, which is probably why I never really watched the critically acclaimed show.  Those neighborhoods were thrust onto my map last week.

The looting, the arson, the rock and brick throwing that I saw firsthand were wrong, and were seriously criminal acts that cannot be excused.  At the same time, I feel I have a better understanding of why those criminal acts took place.

The Baltimore Neighborhood Indicators Alliance http://bniajfi.org/ is a remarkable website that shows detailed statistics about every neighborhood that makes up this city of 620,000.  The figures bear out what a drive through the wide belt of poverty north of downtown indicates:  that people in the belt, including Freddie Gray and most of his neighbors, are in an economic situation that's glaringly worse than Baltimoreans who live outside of the poverty belt.

Only 45 percent of people in the Sandtown-Winchester neighborhood have jobs, and a third of all households in the community fall below the federal poverty line of $23,850 for a family of four.  The boarded up or empty-shell buildings that make up the majority of most blocks in the neighborhood are testament to the statistics.

One other, less-cited statistic is Percent of Employed Population with Travel Time To Work of 45 Minutes and Over.  Sandtown-Winchester residents have the longest commute in the city, with more than 34 percent of residents fitting in the over-45 minutes commute category, even though Sandtown-Winchester is only three miles from the commercial center of Baltimore.

In other words, there are no longer many businesses at all in Baltimore's poverty belt, so nearly everybody has to work outside of their neighborhood. Contrast that with all of the other Baltimore neighborhoods, where there's a better balance between people working close to (or in the) home, and people commuting to the city center.  The truly sad thing is that the CVS that was torched by rioters was one of the few significant businesses in operation in Sandtown-Winchester.

A key to any hope for Baltimore's improvement was said by the state senator from Sandtown. Catherine Pugh, a Democrat, said Wednesday night at curfew time that while development around the city's harbor had grown impressively in the last 15 - 30 years,  investment in the neighborhoods north of downtown had not been promoted.

Pugh ran unsuccessfully for mayor last year, in full disclosure.  The victor in the race, the current mayor, Stephanie Rawlings-Blake, has been the subject of heavy criticism for her handling of the Freddie Gray-related protests and violence.  Some of that criticism is not deserved.  Rawlings-Blake ordered the curfew, which achieved its objective of calming down a city on edge, thanks ,of course, to a major assist by the state and other regional governments.  She has also, in the past, called for police reform, in the name of constituents like Freddie Gray, long before he became both a statistic and a household name.

Mayor Rawlings-Blake would help herself, and the city she represents (although, by the way, only 18 percent of registered Baltimore voters bothered to go to the polls in the last election) if she were to make a full court press to bring businesses to the wide belt of poverty.

How can she do this?  A start would be to consult closely those statistics I mentioned earlier, the Baltimore Neighborhood Indicators Alliance (BNIA), and, more important, consult the researchers who put them together.  The BNIA is the result of efforts by the Jacob France Institute at the University of Baltimore.  For the last 13 years, it's been, by its own description, leading a "movement toward well-informed decision making for change." It sounds like boilerplate mission

Under Armour's world headquarters is in the a;slkdjfkladsjf

statement material, but when you look at how detailed and thorough this research on Baltimore's economy, culture, ethnography and quality of life is, you see just how very devoted to the improvement of life in Baltimore the Jacob France Institute is.

This is not meant to be a cheerleading session for the BNIA and the Jacob France Institute.  What I mean to do, though, is point out that Mayor Rawlings-Blake and other leaders of the city, including State Senator Pugh and, for that matter, Police Chief Anthony Batts and the very effective and powerful member of Congress from the district in which Freddie Gray lived, Rep. Elijah Cummings, would all show deep love for their city by making their focus the same as the BNIA's mission.  It calls for "a common threshold from which to have discussions about what is best for changing conditions. Baltimore needed a mechanism to hold itself and all others who work, live, play, and invest in its neighborhoods, accountable for moving in the right direction."

The work Baltimore's city leaders have in front of them every day is hard.  Extremely so.  By taking a close, detailed look at what the BNIA calls the "vital signs" of Charm City's less than charming neighborhoods, and by having that drive future development, there's a chance that the CVS won't be the only new business in a community.

The problems in Baltimore are enormous.  It does not mean they are insurmountable.  Focusing the "discussions about what is best for changing conditions," as the BNIA says, on the belt of poverty in Central Baltimore, is a healthy, fertile seed for the next phase of trying to improve life for all of the city's residents.