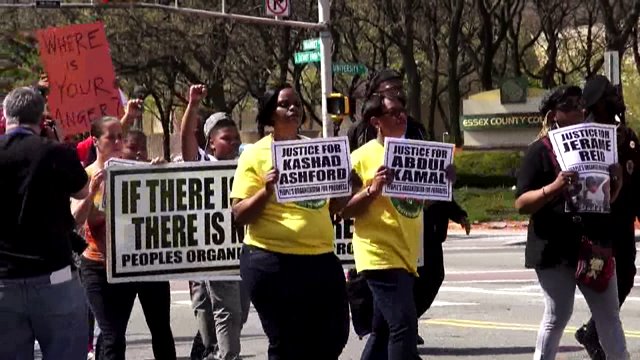 Protesters marched in Newark to stand with Baltimore.

NEWARK, N.J. (PIX11)-- It’s been almost one week now since the city of Baltimore erupted in protest.

Businesses burned before community members came out to clean up their city and condemn the violence. Six Baltimore Police officers are facing charges in the death of Freddie Gray. New Yorkers have turned out by the hundreds to protest police brutality. Today, New Jersey joined in with the calls for justice.

Around 60 Newark residents and people from surrounding towns in northern New Jersey marched down Market Street in Newark carrying signs with the names of New Jersey men who have been shot by the police.

Devin Hepburn brought his two young nephews to Sunday’s protest. He said his other nephew, 23-year-old Kashad Ashford, was unconscious when a state trooper and Lyndhurst Police shot him 10 times in the head last September.

"I want them to remember that no one deserves to die no matter what right or wrong they do. Everybody deserves due process," said Hepburn.

Although dozens turned out for Sunday’s demonstration in Newark, the protest was much smaller than the police brutality protests in New York, Philadelphia, and Boston.

When asked about the turn out in Newark, Hepburn said: "People just have to wake up. It’s one of those things that until it hits you, until it hits you on your doorstep, a lot of people ignore it. I mean you see people out here, they’re blowing their horns and everything, which is a good thing, but they should be out here marching with us."

Newark’s march was entirely peaceful. Police stood alongside protestors and guided the march down Market Street. A starkly different picture than what was seen in Baltimore on Monday night, or in Newark in 1967.

"It’s unfortunate when these types of things happen," said Hamm, "And my sympathies go out to those that it happened to. But you know people are so concerned about property. Where is the concern for all the victims of police brutality? People seem to be more concerned about broken windows than they are about broken necks."

As the march moved forward in Newark Sunday, there was peace in Baltimore. The National Guard is moving out. And the curfew put into effect earlier this week is being lifted.