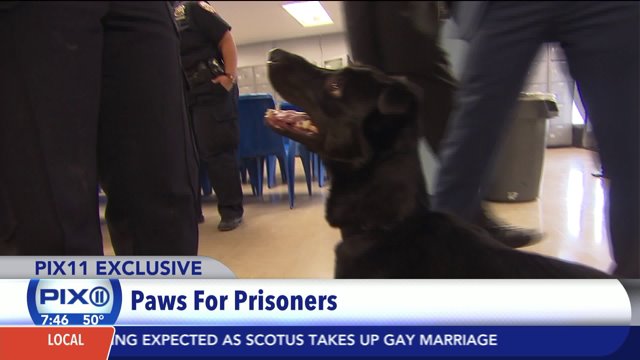 (PIX11) -- The newest member of the Department of Corrections team just happens to be man's best friend: 1-year old Ace, who is a black-lab mix, full of life and energy.

Ace has moved into Rikers Island from a city shelter to help combat violence within the jail, specifically teen violence.

In 2014, 71 percent of violent attacks on inmates at Rikers were by fellow inmates. The New Yorker released a video last week from 2010 that shows a teenager getting punched, kicked and thrown to the ground by fellow teen inmates and even the corrections officers.

This year alone there have been more than 700 inmate attacks within Rikers, according to the city Department of Corrections. Those numbers prompted Mayor Bill de Blasio to initiate a 14-point plan to help curb the violent culture inside the jail. The K-9 "Rikers Rovers" initiative is part of that plan.

The goal of the program is simple: train the dogs, walk the dogs, and get the dog adopted by a loving family. Ace even sleeps in one of the teen's cells at night

"It's like having another person in your cell, someone to talk to even if he doesn't talk back," one teenage inmate said. " I have learned responsibility because having a dog is like having a child."

The dogs are trained to live in jails before moving in, and the teens have to apply, just like a job, to be part of the K-9 program. It's a structured environment to prepare them for life outside of jail.

"The program has helped me mentally, physically, emotionally and helped inspire me to do better in life," another teen said.

Since the program began, the Saunders told PIX11 News the teens have stayed out of trouble. If they were to have any violent incidents, they would be kicked out of the program.