Diamonds: Getting your money’s worth 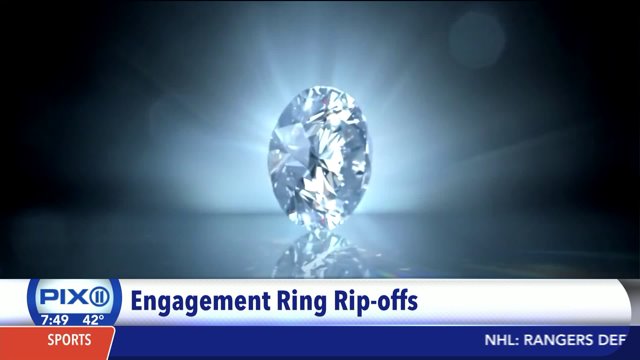 (PIX11) -- From fracture-filled diamonds to synthetic stones and phony certificates, the business of buying a sparkly gem is a dirty one indeed.

“ We’re shopping for an engagement ring,” said Eric Hammond, who went undercover with PIX11 News to see just how these deals are being made.

The saleswoman across the counter is all smiles: “Well, congratulations!”

PIX11 News went diamond shopping at some of the most well-known stores and getting the hard sell.

“Eight-thousand dollars is the list price. It should appraise around $12,000. You won’t beat that,” claims the salesman with the calculator in his hand as he punches up numbers. He adds as he’s walking away, “She gave you a really good price.”

But there’s a good chance the stone we’re looking at isn’t as good as the advertised, and with its inflated appraisal, it would set us up to pay higher insurance premiums for years to come.

It’s one of the biggest moments of our life: saying, “I do.” Before the vows, comes the proposal.

And too often it all gets tarnished by the ugly side of diamond buying.

Worldwide, we buy $72 billion a year worth of diamonds, mostly here in the U.S. But that booming business is largely unregulated, according to Barry Block, a certified appraiser.

“There’s no government oversight. None. There should be, but it’s not,” said Block, owner of a business called the Jewelry Judge.

“It’s the Wild, Wild West when it comes to buying diamonds?” I ask. “It is,” he answers.

We sent our couple Tania Breton, a PIX11 staffer, and her boyfriend Eric Hammond to shop for stones. Here’s how the dirty diamond went down: A diamond is listed, retail price for $8,000. The jeweler sells it for $5,000, a near 40 percent discount. The kicker: the promise that it’ll appraise for up to $12,000. Confused yet?

“You’re stuck trying to figure out which number to believe and also after you buy what’s the real value of it,” Hammond said.

We went shopping for diamonds at Jared, part of a giant jewelry company that includes Kay and Zales jewelers, where we were told a $7,000 1-carat diamond should appraise for "maybe $12- to $14,000,” according to the saleswoman.

We also went shopping at the Jewelry Exchange in Woodbridge, N.J. That same size and quality diamond was even cheaper -- just under $5,000. Again, we are told the diamond would appraise for more than twice the purchase price.

“It should appraise for $12,000,” the salesman confidently states.

So what are these 1-carat stones that would sell for either $5,000 or $7,000 really worth? We took our undercover diamond buying prices to one of the most respected appraisers in the nation Barry Block.

"When you hear it would appraise for $12 to $14,000?” I ask. “It’s just not true,” he says as he consults with his data base of available stones and available prices.

Here’s how the sellers try to explain these unbelievable diamond discounts. On undercover camera, we capture the come-on. The salesman explains, “For your ring, say you pay $20,000. You should be able to get it to appraise 50 percent or more -- $30,0000 or more. There’s no standards.”

And he’s right. There are no standards. By getting an artificially inflated appraisal from the diamond seller, versus an independent appraiser like Block, the consumer could get ripped off for years by paying inflated insurance premiums for as long as they own the diamonds.

“Jewelrs are not appraisers,” Block says. “If I buy a stone that appraises for double, but needs to be replaced because it’s lost, all I did was pay more for my insurance for years.”

Most insurers will merely replace your lost or stolen stone, paying a deeply discounted price for the goods. According to Barry Block and other experts, a true appraisal should come in at about 20 percent of your purchase price and could save you thousands in insurance premium payments over your lifetime of owning the ring.