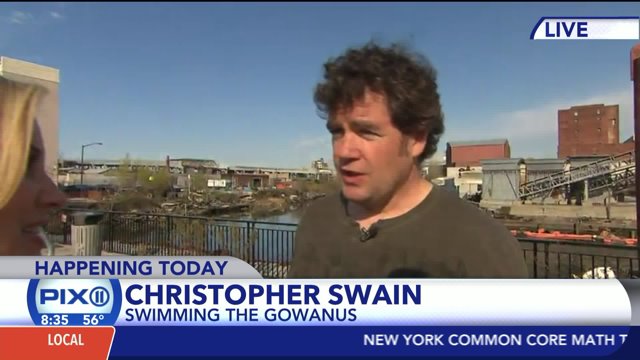 BROOKLYN, N.Y. (PIX11) -- A water activist is taking a dangerous dive this Earth Day, plunging into the notoriously polluted Gowanus Canal to call for faster cleanup of the 1.8-mile cesspool that empties into the Hudson River.

Christopher Swain's swim is set to start at 12:30 p.m. He'll be wrapped into a yellow dry suit, similar to what search-and-rescue crews wear, that will keep the water off his skin. It's puncture resistant, too.

"I could be running into shopping carts, old cars, scrap metal -- who knows what's down there? Better not think about it," Swain said.

The puncture-proof dry suit that Christopher Swain plans to wear during his protest swim in the Gowanus Canal on Wednesday, April 22, 2015. (Photo: PIX11 News)

The water is infamously filthy. Bacteria that causes gonorrhea was found in the canal in 2007, and it's been designated an EPA Superfund site.

"As a result of years of discharges, storm water runoff, sewer outflows and industrial pollutants, the Gowanus Canal has become one of the nation's most extensively contaminated water bodies," according to the EPA .

So why is Swain taking the risk?

"It's for a cleanup, an accelerated cleanup," Swain said. "I want the Gowanus Canal to be safe for swimming every day and, honestly, unless somebody puts themselves on the line, nothing really changes."

He has a plan if he should get any of the contaminated water in his mouth: gargle with a hydrogen peroxide solution or take an activated charcoal pill, which is similar to treatment one would receive if they went to the emergency room for being poisoned.

PIX11 News' Dr. Steve doubted the efficacy of those treatments and said Swain is taking a great risk by entering the waterway.