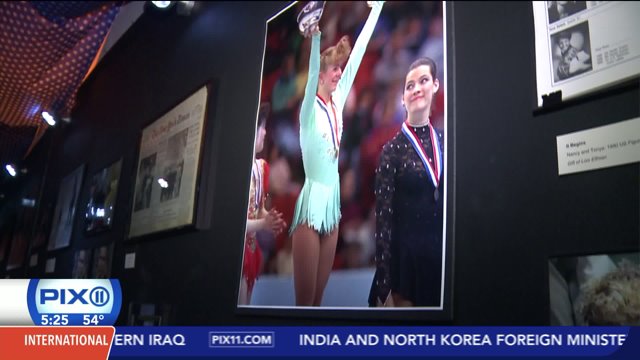 WILLIAMSBURG, Brooklyn (PIX11) -- What started out as a pipe dream has become reality for Brooklyn roommates Viviana Olen and Matt Harkins.

The pair of comedians have built a one-of-kind museum in the hallway of their Williamsburg apartment dedicated to Tonya Harding and Nancy Kerrigan – and the 1994 scandal that captivated the world.

Kerrigan, a favorite to represent the United States in the 1994 Winter Olympics, was brutally attacked at competition in an effort to keep her from competing.

An investigation later revealed that Harding as well as her ex-husband were linked to the shocking plot.

A riveting documentary on ESPN called “The Price of Gold” that broke down the entire ice skating saga inspired the duo to construct the museum.

“We had just seen this documentary and then we would go out and everyone is talking about things that eh, that I [thought] I have nothing to add to this conversation,” Harkins told PIX11 News. “I’d rather talk about something that happened 20 years ago that I have a lot of facts about because I just saw this great documentary last night."

The new space in Olen and Harkin’s apartment now provides a meeting area, Harkin said, where Tonya and Nancy fans can continue to have that same conversation over and over again.

Each artifact in the tight but well-thought out hallway/museum tells a part of the story that rocked the 1994 Olympics with each ice skating diva getting her own wall.

The museum itself relied heavily on donations and whatever the duo uncovered on Ebay.

The big question is – will Nancy or Tonya be visiting the make-shift museum anytime soon?

“We did an interview with the Boston Herald and they reached out to Nancy and the official word was ‘no comment,’” Harkin revealed.

However, Harding’s camp did confirm that the former ice skater thought the museum was “cool.”

“Tonya does think its cool but she’s too busy to come and visit – but we are fine with that.

To go to the museum, visitors have to submit an online request.