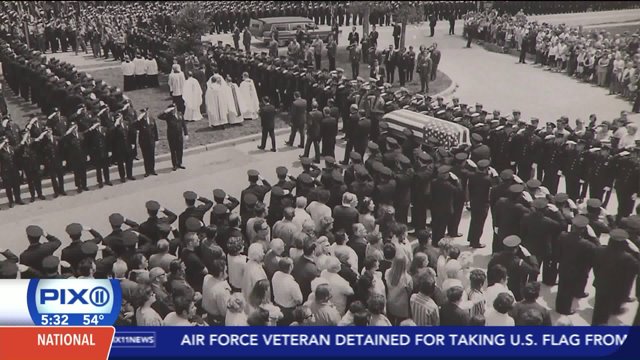 The Blue Knights Law Enforcement Motorcycle Club arrived in a convoy outside Harlem’s 28th Precinct a little bit after noon.

This was the precinct Cardillo, a father of three, served before he was shot inside Mosque #7 on April 14, 1972. Cardillo died six days later from his stomach wound.

Mayor John Lindsay and Police Commissioner Patrick Murphy failed to attend Cardillo’s funeral. The case was a political hot potato, during a time of racial unrest and violence—when two officers at a time were sometimes assassinated by radicals from the Black Liberation Army.

The Cardillo murder was slightly different. And on the same day as this year’s ride, an explosive report from investigative writer, Micah Morrison, suggested the FBI may have had a lot more knowledge about Cardillo’s case than the NYPD ever knew.

“Do I think the FBI has released all their records, dating back to the day of the Cardillo shooting?” Jurgensen asked rhetorically on Monday.  “No.”

According to confidential FBI documents Morrison secured under the Freedom of Information Act, the FBI had a COINTELPRO program in New York that wanted permission to make “anonymous and other pretext phone calls... to neutralize and frustrate the activities of” black nationalists.

On the day Cardillo was shot, a phony 10-13 call went out, indicating an officer needed assistance on the second floor of 102 West 116th St. in Harlem.

The person identified himself as Detective Thomas.

102 West 116th St. was the address for Mosque #7, run by Nation of Islam minister, Louis Farrakhan.

Cardillo was among several uniformed cops that went running in, using the front doors, which were normally guarded by Farrakhan’s security force, the Fruit of Islam.

Inside, the Fruit of Islam tried to stop the armed officers from going to the second floor of the mosque. Several cops were beaten badly. Cardillo was shot in the stomach by someone who used his police-issued gun.

The FBI documents and memos that Morrison uncovered indicated the New York office had permission to make “pretext” calls, perhaps hoping to break up mosque meetings or give police a reason to conduct raids.

“I did not know of the FBI’s COINTELPRO operation,” said Jurgensen, who took over the NYPD’s Cardillo investigation in 1973.

In 1974, Jurgensen had a witness from inside the mosque who fingered the alleged gunman, Louis 17X Dupree. Dupree was arrested, but prosecutors had a problem.

Then-Deputy Police Commissioner, Ben Ward, had ordered all white officers out of the mosque, ostensibly for their own safety.

One detective reported seeing a mosque member mopping up all the blood at the site where Cardillo was shot.

The first trial for Dupree ended with a hung jury.

In the second trial, Dupree was acquitted.

“There was no crime scene. No forensics. “

Andre was one of the first officers to respond to the mosque, as his fellow cops were getting beaten inside.

When he got inside, he found a bleeding Phil Cardillo on the floor.

“I said to him, ‘Philly, God’s gonna take care of you,’” Andre recalled.

“We had the murderer in the basement,” Andre told PIX11 News.  “I had knocked him out.  And I left 14 prisoners in the custody of Chief Seedman.”  Al Seedman was the NYPD’s Chief of Detectives at the time.

But Seedman said he was forced to let the suspects go, because Minister Farrakhan, Congressman Charles Rangel, and Deputy Commissioner Ward arrived on the scene and demanded the NYPD investigators leave the basement.

“One guy’s other shoe was next to Phil’s body,” Rudy Andre pointed out to PIX11.

Former prosecutor, John Van Lindt, remarked of the 14 suspects who were let go, “Nobody took their names, addresses or any form of I.D.”

While the retired detectives remain frustrated no one ever paid a price for Cardillo’s murder, they told PIX 11 their annual motorcycle ride is over, because they’ve achieved what they set out to do.

The goal of the ride was to get formal, public recognition for Patrolman Cardillo’s ultimate sacrifice.

A few months after PIX11 News did a special report last summer on the lack of a tribute to Cardillo, Community Board Seven in Queens voted to approve a street sign, in Cardillo’s honor, outside the new, NYPD Police Academy in College Point.

It still needs final approval from the City Council.

It’s expected to be erected this year.  A brand-new NYPD boat may also be named in Cardillo’s honor.

But Cardillo’s brothers and sisters in blue are still waiting for the final truth about the circumstances surrounding his death.