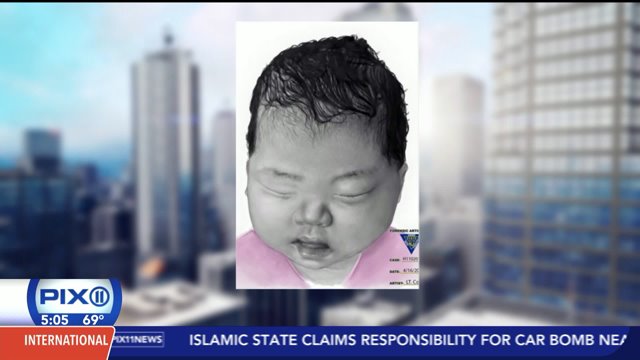 Months after a newborn girl was found dead among the trash at a New Jersey recycling center, police are still searching for the mother of Emma Grace.

FARMINGDALE, N.J. (PIX11) -- Months after a newborn girl was found dead among the trash at a New Jersey recycling center, police are still searching for the mother of Emma Grace, named so by a local church which is holding a funeral this weekend for the child who met a gruesome end soon after she came into this world.

New Jersey State Police on Friday released a composite sketch of what the child may have looked like when she was born, asking for the public's help to track down the little girl's mother.

The full-term baby’s remains were found about 1:30 p.m. Nov. 11, 2014, at the ReCommunity Recycling facility on Railroad Avenue in Farmingdale, authorities said. A worker at the plant discovered the child’s headless body. Searching the surrounding trash led investigators to find the girl’s dismembered head, two petite blood-stained blouses with no tags, and a shopping bag from a store in Orange, N.J.

The clothes and bag, pictures of which have been released in the hopes of jogging someone’s memory, are believed to be connected to the girl’s mother, police said.

“There has been no evidence at this time to point to the mother being a victim of foul play, although the possibility has not been ruled out,” state police said.

Investigators don’t believe the girl was stillborn. Evidence suggests she breathed before she died. The Middlesex County Medical Examiner’s Office does not yet know the cause and manner of her death.

What investigators do know is that the little girl was born 21 ½ inches long and weighed 7 pounds 5 ounces. Her hair texture suggests she was of mixed race with possibly Hispanic origin.

Though there is little more information available about who this child was, members of the Ardena Baptist Church in Howell, N.J., have taken her in as their own. They gave her the name Emma Grace and will hold a funeral for her at 3:30 p.m. Saturday at the church, state police said.

If the infant’s mother is responsible for dumping her baby in the trash, she may have tried to hide her pregnancy, an FBI profiling expert told New Jersey investigators. She might have been living a different lifestyle while pregnant and since she gave birth, may have resumed to some of her “more normal routines.”

A $5,000 reward has been posted for information that leads to the identity of the baby’s mother.

Anyone with information is urged to call contact Detective Sergeant Francis Robina with the New Jersey State Police Major Crime Unit at 609-882-2000 ext. 2538 or Detective Brian Weisbrot of the Monmouth County Prosecutor’s Office at 1-800-533-7443.

Tips can be reported anonymously by calling Monmouth County Crime Stoppers at 1-800-671-4400, by texting “MONMOUTH” plus the tip to 274637, or sending an email through this website.