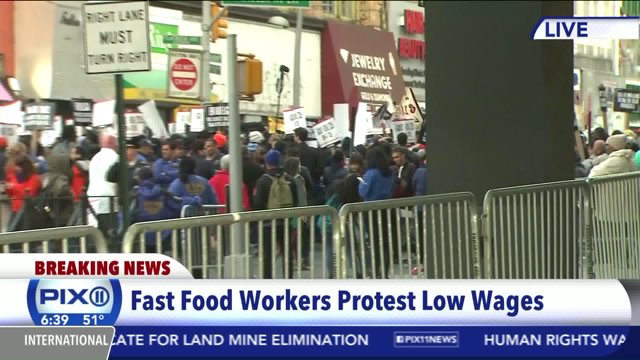 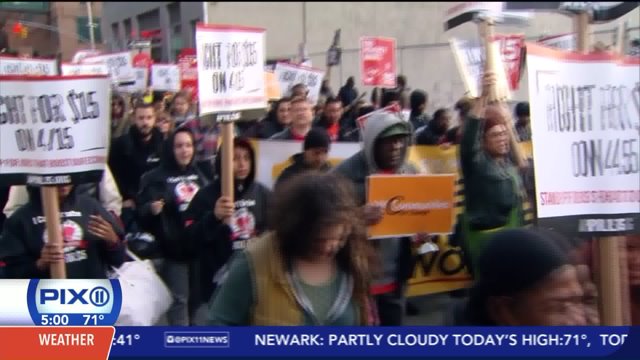 NEW YORK (AP/PIX11) — Hundreds of protestors are blocking the streets in Manhattan Wednesday demanding $15 an hour and a union for low-wage employees.

The protest began in downtown Brooklyn this morning as the demonstrators flooded the streets near Fulton Street and Flatbush Avenue as the morning rush began. They protested outside a McDonald's then moved throughout the city for day-long demonstrations.

The city's protesters ended up at Columbus Circle Wednesday evening. Traffic on Central Park West was blocked around 5:30 p.m. due to crowd of protestors. The protest purposely coincides with Tax Day, the organizers say.

A grandmother who works at McDonald's brought her grandchildren to the Brooklyn protest, saying she can't afford to pay for child care when she's at work. She told PIX11 News making ends meet is nearly impossible on the state's $8.75 an hour minimum wage.

I'm proud to stand with hundreds of #workers at the intersection of Fulton and Flatbush to #FightFor15, #15AndAUnion! pic.twitter.com/ti1c6S6nna

Taxpayers are footing the bill for that economic hardship, researchers said.

This week, a study out of the University of California Berkeley's Labor Center found that low-wage jobs cost U.S. taxpayers $152.8 billion each year in public support used by working families in low-wage jobs.

The latest nationwide protest comes two weeks after McDonald's announced a pay bump for workers at its company-owned stores, suggesting the chain is also moving to take control of its image as an employer. But that raise applies only to 1,500 McDonald's-owned restaurants and does not include workers at 90 percent of the fast-food behemoth's restaurants.

The Fight for $15 campaign is being spearheaded by the Service Employees International Union and began in late 2012 with fast-food workers. Since then, organizers have used the spotlight to rally a variety of low-wage workers, including airport workers, home care workers and adjunct professors.

Demonstrations Wednesday will take place in more than 230 U.S. cities and college campuses.