FBI, NYPD searching for Brooklyn bank robber who threatened to ‘blow himself up’ 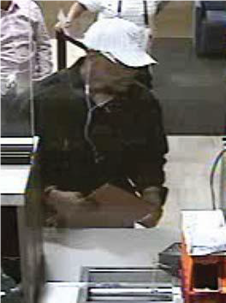 The FBI and NYPD are seeking the public's assistance finding a man who threatened to "blow himself up" while robbing a Brooklyn bank earlier this month.

FLATBUSH, Brooklyn (PIX11) -- The FBI and the NYPD's Joint Violent Crime Task Force are seeking the public's assistance finding a man who threatened to "blow himself up" while robbing a Brooklyn bank earlier this month.

Authorities say the suspect walked into a Chase on Nostrand Avenue in Flatbush Avenue April 12 shortly before 5 p.m. and displayed a note demanding cash. He then told the teller he would blow himself up and motioned to what appeared to be a remote detonator in his hand. It is unclear if the device was real or a hoax.

The suspect demanded money and said he would "blow himself up." (Photo: FBI)

The suspect, described as a male black, approximately 6 feet tall, and 30 to 40 years old,  is considered armed and dangerous. He was last seen wearing a white baseball hat, a dark denim jacket, glasses and white sneakers.

A reward is available for information that leads to the identification, arrest, and conviction of the subject in this case. Anyone with information is asked to call the FBI at 212-384-1000. Tipsters may remain anonymous. The subject should be considered armed and dangerous.