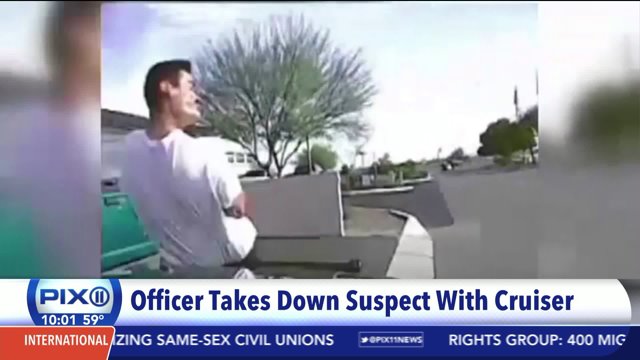 WARNING: Some people may find the video disturbing, discretion is advised.

MARANA, Calif. (CNN) -- Police in Arizona said Tuesday that an officer who intentionally used his car last month to run into a suspect with a rifle probably saved the man’s life.

The man’s lawyer strongly disagrees. Video of the incident has stirred debate about what type of force police should have used to detain a man with a gun.

“Everything in the video seems to point towards an obvious excessive use of force. It is miraculous that my client isn’t dead,” said attorney Michelle Cohen-Metzger.

The incident was recorded February 19 on the dashcam of two Marana police cars that were following the suspect, Mario Valencia.

Police in Marana, Arizona, said that an officer who intentionally used his car to run into Mario Valencia, a man armed with a rifle and a suspect in a February 19, 2015, earlier crime spree, probably saved the man's life. Valencia's lawyer disagrees, saying the video "seems to point toward an obvious excessive use of force."

In one video, an officer who was tailing Valencia at slow speed reports over the radio that the suspect has fired one round in the air with a rifle he is accused of stealing that morning from a Walmart.

Another patrol car zooms past, runs into the man from behind then hits a short wall next to a driveway. Video from Officer Michael Rapiejko’s camera shows the officer running the man over and the windshield smashing as the car hits the wall.

“Oh Jesus Christ. Man down,” the officer in the first car says.

Police in Marana, which is about a half-hour from Tucson, have justified Rapiejko’s actions.

“If we’re going to choose between maybe we’ll let him go a little bit farther and see what happens, or we’re going to take him out now and eliminate any opportunity he has to hurt somebody, you’re going to err on the side of, in favor of the innocent people,” Police Chief Terry Rozema said. “Without a doubt.”

CNN affiliate KOLD reported Valencia was in serious condition when he was taken to the hospital and was released into police custody two days later.

KOLD also reported that before Rapiejko’s encounter with Valencia, the suspect had pointed the rifle at his head multiple times and threatened suicide before fleeing, according to police.

Tucson Police Sgt Pete Dugan told CNN that Valencia was involved in several incidents in Tucson the day he was struck.

At 6:45 a.m., Valencia robbed a 7-Eleven with a metal object in his hand. He was charged with theft.

A little more than an hour later, police said, Valencia set a fire at a church and was charged with arson of an occupied structure.

Just after that he entered a home and stole a car, police said, adding that he later stole a gun in Marana.

His next court appearance is May 18. He is being housed in the Pima County Jail’s medical unit.