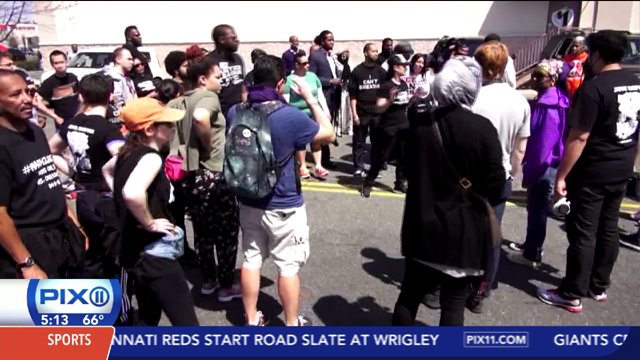 NEW YORK (PIX11) - Marchers took their first steps toward Washington D.C. on Staten Island this morning. The starting line for their journey was the Outerbridge Crossing.

The message they’ll carry through five states and over a half-dozen cities: Stop police on minority violence.

“We’re really hoping to mobilize people in every city and every town we go to,” said Angelo Pinto, shortly after marching to New Jersey.

Marchers paid homage to Eric Garner beginning their journey in the borough where he died. Garner was put in a chokehold by a NYPD officer last July, but his death is not the only one on the minds of marchers as they set out on this 250-mile walk.

“Just this past week we saw a man, Walter Scott, got shot in the back 8 times and was handcuffed while dead on the ground. These are the kinds of atrocities that we are seeing across the country, in every corner of the United States of America. And our march is to say: we’re not going to be silent anymore,” said march organizer Linda Sarsour.

Roughly 100 marchers made the first leg of the journey into New Jersey. They took a break in Woodbridge, N.J. before continuing on to Newark. A rally is planned tonight in the Brick City at 7 p.m.

Marchers also plan to rally in Trenton, Philadelphia, Delaware, Baltimore and on the mall in D.C. Once they reach the capital, organizers say they hope to meet with federal legislators to push for passage of a ‘justice package’. They want legislators to confront the national crisis of police violence by passing legislation that they say would end racial profiling, demilitarize police and shift juvenile justice from prison time to prevention.