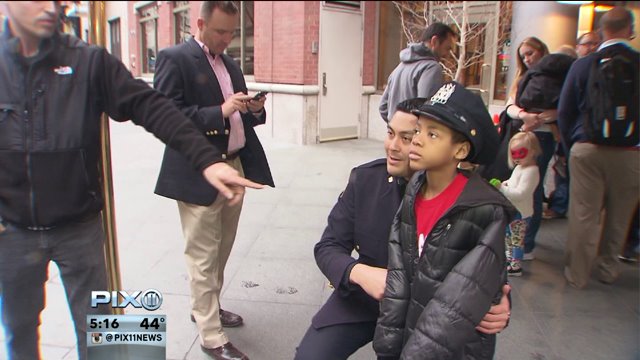 NEW YORK (PIX11) - A woman from Ohio who was in town to get help for her sick son found herself in a bind -- but, thanks to the generosity of a police officer, she is now trying to figure out how to pay it forward.

Charnee Merritt and her 8-year-old son Israel are staying at the Ronald McDonald House so that Israel can get treatment for Neuroblastoma, a rare form of cancer.

Merritt knows being in the city will help him get the best care but what she did not know was the NYC Parking rules.  When Merritt parked her car near a fire hydrant on East 73rd street,  it was towed.

Merritt said, “I came outside and said 'OMG did my car get stolen?' I am not thinking it was towed because I thought I parked far enough from the hydrant but I guess not."

This desperate mother then called the 19th Precinct and NYPD officer P.J Conley answered the phone.

Conley said, "She tells me her car got towed and her son was here getting treated, it broke my heart so I tried to make some calls to pier 76 to see if they would help us out a little to no avail.”

That's when officer Conley took matters into his own hands to help out, The 7-year veteran went over to the Ronald McDonald house to give Merritt the money to pay for her car.

Merritt remembered, "He said, 'You know what I am going to come help you. I am going to pay the 185 dollars to get your car out of towing and I said thank you , thank you.'”

Little Israel is fighting for his life with his mother by his side, and his new friend made a big difference. Merritt hopes one day she could pay it forward and Conley said if he had to it again for anyone in need, he would.

If you would like to donate to help Israel, visit the "Join the Cause to Help Israel Fight Neuroblastoma" Facebook page.