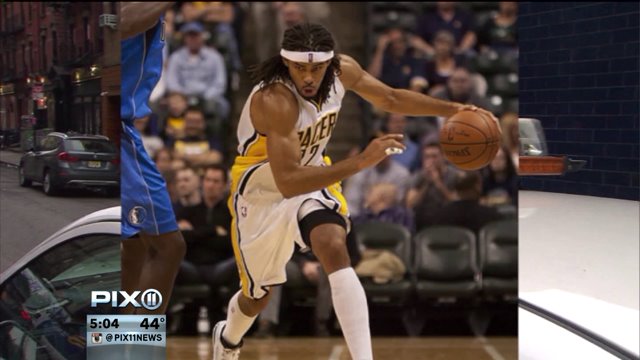 MANHATTAN (PIX11) -- Former Knicks player Chris Copeland is recovering after he was stabbed in a Chelsea attack that also injured Copeland's former fiancee and another woman early Wednesday, authorities said.

The violence broke out about 4 a.m. near West 17th Street and Ninth Avenue. Police said Copeland and former girlfriend, Katrine Saltara,  were arguing on the street when a group interfered. The dispute escalated until one man pulled out a knife, which was recovered.

Copeland suffered stab wounds to his left elbow and abdomen, his current team, the Indiana Pacers, said in a statement. He was taken to a hospital and listed in stable condition.

In the chaos, Saltara and another woman were also slashed, police said. Their conditions are not yet known.

The 22-year-old suspected attacker, Shevoy Bleary-Murdock has been arrested, police said. He is being charged with assault and felony criminal possession of a weapon.

In a joint statement Antic and Sefolosha said:

"As members of the Atlanta Hawks, we hold ourselves to a high standard and take our roles as professionals very seriously. We will contest these charges and look forward to communicating the facts of the situation at the appropriate time. We apologize to our respective families, teammates, and the Hawks organization for any negative attention this incident has brought upon them. We are unable to provide further comment as this is an ongoing legal matter."

"...we never want to see our players put themselves in a potentially negative situation. We will continue to look into the facts of the incident but with the information and foundation that we currently have established, we will support them through this process," Budenholzer said.

"Otherwise it is a continuing legal matter and I will have no further comment."

Aerial footage of the scene showed crime scene tape lining the sidewalk outside 1 OAK, which describes itself as having a "celebrity-heavy clientele."

The club said "a review of the video footage seems to reveal the incident did not originate from or surrounding the venue." A spokesperson for 1 OAK said the attack happened out of the view of its security guards, and the club is cooperating with police.

A New Jersey native, Copeland played for the New York Knicks from 2012 to 2013 and since his departure from New York has been a forward for the Pacers.

"Our thoughts are with Chris and those injured," Pacers president Larry Bird said.

The Associated Press and PIX11 News' Jeff Crianza contributed to this report.