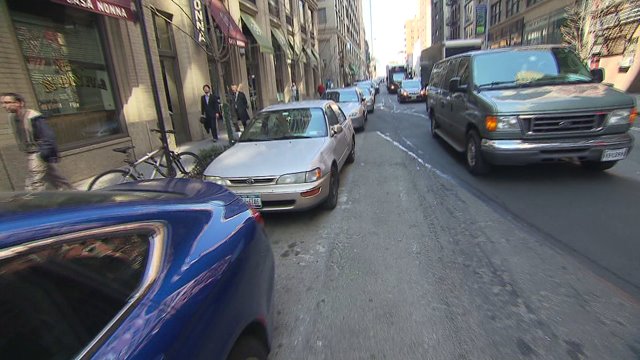 NEW YORK (PIX11) -- New York City’s traffic enforcement agents, the ones who give out parking tickets, recently began illegally parking their own private cars on a busy city block. The parking signs on 38th Street between 8th and 9th Avenues in Manhattan make it clear that only commercial parking is allowed.  The limit is three hours at a cost of $4 an hour. There are muni-meters up and down the block.

But a couple of weeks ago, trucks making pickups and deliveries on this garment center block, found there were no spaces available. The reason is that agents had begun parking their own private cars on the block, taking up almost all the spaces on both sides of the block.  Business owners and truck drivers complained to PIX Investigates.

We learned that the Traffic Enforcement Division had recently opened a new office on 36th Street and 7th Avenue. Apparently many of the agents decided to use W. 38th Street as their own private parking area, despite the fact that they are not commercial vehicles and were not paying for the parking.

Most of the agents’ cars displayed parking permits in their windshields and were not being ticketed. But merchants on the block complained those cars were hindering their business, forcing their trucks to double park when making pickups and deliveries.  It was also making an already congested block even more difficult to navigate.

PIX11 Investigates contacted the New York Police Department, which oversees the Traffic Enforcement Division. The NYPD issued a statement saying West 38th Street between 8th and 9th Avenues is not an authorized parking area for traffic agents to park their private vehicles. The NYPD said the agents had already been told that and would be put on notice once again.

Sure enough, when PIX11 returned to the block a few days later, there was not one traffic agent’s private car parked anywhere on the block.