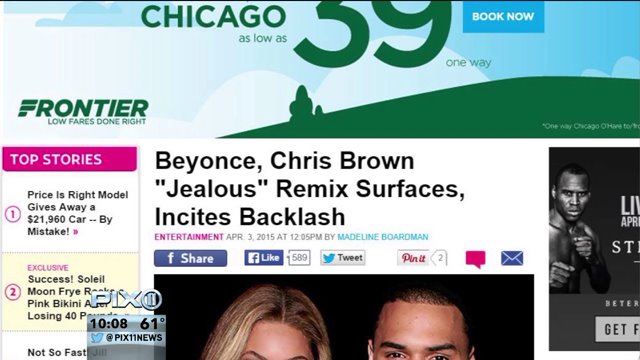 A brand new remix of Beyonce’s hit “Jealous” featuring Chris Brown is, at least musically, is supposed to be a match between two superstars, made in musical heaven.

After all, this is Beyonce we’re talking about.

Queen of the Beehive.

Leader of the ‘Beygency’.

If you don’t know what that is – trust us.

You don’t want to ever find out.

But social media – which, true to form, is quick to first opine, and then pounce on anything that resembles the controversial…did just that.

“Let me get this straight…Beyonce (a claimed feminist) made a remix with a man who beat a woman…o k.

“This is art, and this is Beyonce’s decision. She’s a big girl, and I think if she really wanted to collaborate artistically, I think it’s up to her to decide how she felt about her collaborator. People who are on social media and who want to criticize Beyonce for collaborating with chris brown, they are certainly entitled to their opinion. They have to look at chris brown, he spent six years on probation, he served over four months in jail, he did hours of community service, he has tried in many ways to repent and make himself a better man, and he’s made peace with Rihanna, who was his victim,” said Fuller.