How much time is enough to spend with your kids? 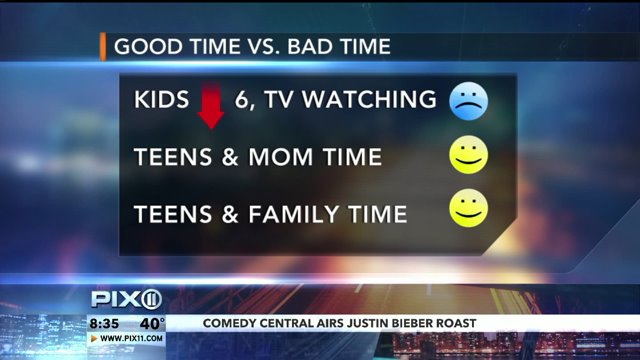 New research shows parents today spend more time with their children than non-working moms in the `60s, so why do moms and dads feel guilty about taking time away from the tots?

(PIX11) -- How much time do you spend with your kids? Do you think it's enough? Chances are you're thinking, 'I wish it was more.'

Working moms and dads really feel the stress, yet Americans spend more time with their children than anyone else. So why do they feel so guilty about taking time away from the tots?

Parents spend more time with their children than their non-working mom counterparts in the 1960s, according to researchers at Bowling Green State University.

They spend so much time with their kids because they believe it helps predict success for their little ones. But it turns out all that time and worry doesn’t make kids happier, less likely to do drugs or be successful.

Though there is such a thing as good and bad time spent together -- and that does make a difference, the researchers found.

For kids under 6, if you spend time watching TV or doing nothing with them, it is detrimental. So get up off the couch. Researchers found that the more time spent with mom in the teen years, the less risky behavior the teen exhibited. And the more family meals a teen experiences, the less likely they are to abuse drugs and alcohol and engage in other risky behaviors, plus they end up with higher math scores.

Here's the magic number: 6 hours a week is all it takes, in the teenage years. Together as a family, you could do that just on a few nightly dinners and a game night.

But don't overdo it. The American Academy of Pediatrics said for our little ones, they need unstructured solo play time for healthy development.

When parents spend too much time with their children, forsaking their own endeavors and personal, alone time, it stresses them out. They shave sleep to do more for their children, leaving them sleep deprived, feeling guilty, and building anxiety.

So go for quality time, not quantity. This research and others have borne out that if parents read with their kids, make and eat meals together, and parent with warmth and sensitivity that all leads to healthy, stable kids not seeking drugs and sex at a young age.

Then what is the No. 1 predictor for a child's success? Mother's education level and income.

So skip all that running around, go back to school, and get a better job. (Easier said than done!)