Is Common Core helping or hurting? How thousands of families opting out from testing may influence its role 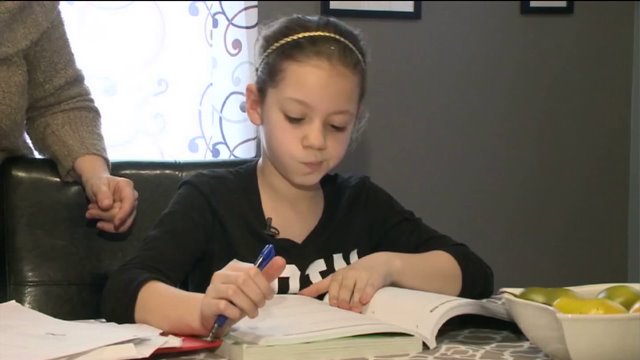 NEW YORK (PIX11) -- Seventh grader Niko Hardison and his fifth grader sister, Nadia, like most of the three million students in New York state's public schools, worry a little about things like their books being overdue at their school libraries, or about their nightly homework.  However, the Hardison siblings have one other significant thing in common with many other students in New York, and it's also a worry, and it is not at all little.

"Me and Niko actually came home crying one day," said Nadia, "because it was really

She was talking about the schoolwork she and her brother have had to do in order to meet Common Core standards.  Those are targeted New York State public education goals laid out by the state education department in conjunction with 42 other states nationwide.

Among New York's Common Core goals in math  are such benchmarks as, "Make sense of problems and persevere in solving them."

In the subject of English Language Arts, the New York State goals  include, "Read and comprehend complex literary and informational texts."

The standards are intended to ensure that students are fully prepared for college or for a career when they graduate from high school, and assuming that most parents want a similar level of preparation for their children, it may come as a surprise that a large and growing number of New York parents feel the way Niko and Nadia's mother does.

"If the homework is this way," she told PIX11 News, looking back on a variety of assignments on which she's tried to help her children in the past three years since their schools started doing a Common Core curriculum, "I can't imagine what's on the test."

Desiree Hardison got her two children exempted from Common Core testing, which is the most controversial part of the almost-nationally accepted standards.  Hardison and her family are by no means the only so-called opt-out family.

Similarly, the principal of South Side High School, in Rockville Centre, Long Island, noted, "Fifty percent of our ninth grade class opted out."

That principal, Dr. Carol Burris, was the 2013 New York Principal of the Year.  Prior to Common Core being officially adopted by New York State, Burris had favored its standards, and argued for them in her book,  Opening the Common Core .

Since the standards were officially introduced, however, Dr. Burris has done an about face.  "What's happened," Burris said in an interview at her school, "is the state of New York and the federal government, through their mandates, are hurting kids.  And how can I stand by and let that happen?"

"Because what happens with the test scores," she continued, "is they say, 'This child is on the way to college readiness, and this one is not.'  You start giving that message to nine year olds, and pretty soon they start to think that college is not for them."

As for her own students, Burris said, "They understand, and their parents understand, that there are good assessments and there are bad assessments, and the common core test, at least in the opinion of 50 percent of our [9th grade] parents, is not a very good test."

"I'm a big test believer," he said, but regarding Common Core tests specifically, he swiftly added, "The test by its very definition cannot assess... a love of reading, the ability to love words across cultures and other texts.  And the same holds true for mathematics."

However, the Common Core standards specifically state that, regarding English Language Arts, that they're designed to help students "respond to literature by employing knowledge of literary language, textual features, and forms to read and comprehend, reflect upon, and interpret literary texts from a variety of genres and a wide spectrum of American and world cultures."

If that is not happening in New York classrooms, now  that they're required to meet Common Core standards, than what is going on?

"The benefit is," he said, regarding the standards and its test of comprehension and knowledge, which is often called an assessment, "With the new test comes new instruction."

Not only does Everett differ in opinion from Burris and Murphy at South Side High, he, and most New York educators and families, differ in their experiences as well.  As the sign in front of South Side itself points out, it's been recognized by U.S. News and World Report  as one of the best schools in the country.

While that recognition shows the Long Island school's excellence, it also indicates that most of the other schools in New York State are not in as good of shape as the one Dr. Burris leads.

"Educators like her ought to be working to change those assessments and make improvements to them," said Stephen Sigmund, executive director of High Achievement New York, "rather than say, 'Kids, you should just refuse to take the test.'"

His organization is a pro-Common Core educational advocacy non-profit that is mostly supported financially by business groups.

Sigmund's take on Common Core is similar to that mentioned by New York City public school parent Joe Herrera, in an interview on the PIX11 Morning News.

"The standards were raised," said Herrera, adding that students "were challenged to think more critically than depend on rote memorization. I don’t see that as a bad thing."

Common Core advocates also reference a recent, detailed poll of teachers nationwide  that shows that 68 percent of them said that Common Core is going well at their schools.  That figure jumps to 81 percent in schools that have used the standards for at least two years.

However, there's one big sticking point.

"The teacher evaluations being part of the state test -- we don't want to be part of that," said

Doreen Fryling, a music teacher at South Side High School with two children in Nassau County public elementary schools, "And that's why my kids won't be taking the test," she said.

She was talking about why she is upset over Gov. Andrew Cuomo's proposal to base 50 percent of a teacher's evaluation on Common Core-based test scores.

Even some teachers who vocally support Common Core disapprove of the governor's plan.  "To  link teachers' performance so heavily to tests," said teacher Arthur Everett, "is little bit skewed."

The weight of the test scores in rating teacher performance is still be negotiated in Albany.  For the rest of New Yorkers, however, the debate on the Common Core standards has two main arguments, which are summed up by two of the most prominent voices on either side of the issue.

"They're not going away," said Sigmund, regarding the standards and their assessments, or tests. "Teachers we talk with say there has been so much change, so many new things in education year after year... to not pull the rug out from under them."

In contrast, Burris sums up her feelings about Common Core this way:  "I know this whole thing is going to fail.  But are we going to lose a whole generation of students before that happens? That's what worries me."