N.J. poll looks at what bothers Garden State motorists the most 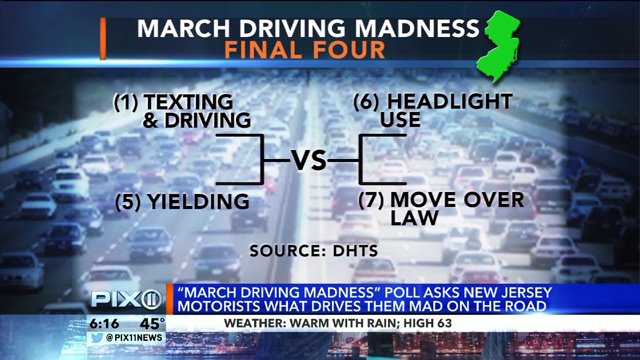 "March Madness" has set in a special way for New Jersey Traffic Control.

In spirit of the NCAA Men's Basketball Tournament going on, New Jersey residents have been voting in an online poll that asks which bad driving habits irks them the most.

After more than 1,000 votes in the "March Driving Madness" bracket's Elite Eight Round,  four notorious driving antics remain: Texting and Driving (1) vs. Yielding (5) and Headlight Use (6) vs. Move Over Law (7).

These final choices can be voted on the Division's web page, Facebook page or tweeting @NJTrafficSafety this week.

Championship round begins next week and the winner will be announced on April 6.

The Division of Highway Traffic Safety asked people on Facebook and Twitter back in February what rules of the road New Jersey drivers need a refresher on.

Nearly 300 people responded and replied with 28 different suggestions for their fellow drivers, they said.

In addition to the four aforementioned bad habits, directional use, left lane travel, tailgating and speeding, were also included.

"Honestly if people didn't abuse the left lane tailgating wouldn't be as bad as it is...but almost getting side swiped by someone who has a yield is way more concerning to me...especially on highways," Brendan G, a resident with a driving suggestion said.

However, for one commenter, motorists that text and drive makes her crazy.

"I say texting and driving, especially near crossing guards and schools, Andi B said. "Though many culprits actually do both at the same time. It makes me crazy!"