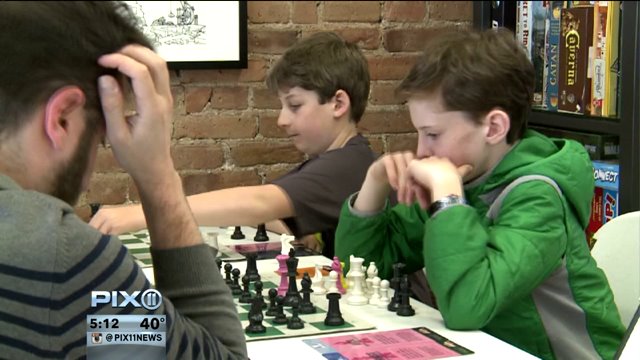 BROOKLYN (PIX11) -- Comedy group "Above Average" has tapped into the board game market with a parody of the popular game "Settlers of Catan" called "Settlers of Brooklyn."

Winners depend on things like kale and coffee instead of sheep and wheat. But, at least for now, "Settlers of Brooklyn" is just a skit.

"Games have become popular enough that they're kind of a medium through which people would attempt to make that joke," said Bob Hewitt, founder of Brooklyn Game Lab.

But coming up with new versions of existing board games is nothing new for Hewitt and the kids at Brooklyn Game Lab.

"The funny thing is we do that here everyday."

At the lab kids create hundreds of modified rules for some of the newest games and they test them out with friends.

"The rule book has an explanation for everything, so there's no creativity," said Simon Horowitz.

Sure, some ideas flop. But many work and make the game more fun.

"The thing that's really interesting is the kids collectively are very good at shaking the best ideas to the surface," said Hewitt.

Hewitt started Brooklyn Game Lab after leaving his job as a digital game designer. There was so much focus on monetizing his work that sometimes it felt like he wasn't even creating games any more.

He credits the board game renaissance in large part to crowd funding sites like KickStarter.

"When you're doing this type of gaming, it's not like Monopoly, it's not like Clue, it's not just throwing dice. These are really really strategically involved games. So tons of critical reasoning, deductive reasoning, critical analysis. All that stuff you would expect from gaming."

And playing the games at Brooklyn Game Lab teaches kids to think outside the box and put some real-life skills to work. Many of the games require negotiation. And by coming up with new pieces for chess like the Princess, it teaches the kids to think creatively.

"The princess is a modified Queen," explained Graeme Tuck. "And what the Princess does is it makes these two Knights right here invincible."

"Like in "Settlers of Catan" there's such a negotiation aspect to it that you're learning so much about so many various parts of your life," said Horowitz. "It's just better and it's more fun."

So while board game beta-testers might look at the "Settlers of Brooklyn" parody and laugh...
they also might get their next brilliant idea.