Death along for the ride? Creepy image appears in photo of 3 subway surfing kids 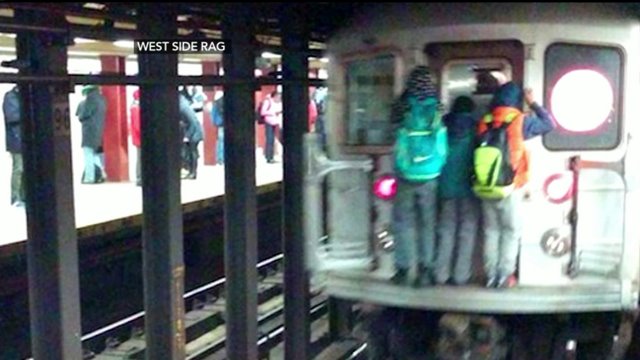 On the same day that a woman fell to her death riding between subway cars, three thrill-seeking children took an even wilder risk clinging to the outside of a moving train.

MANHATTAN (PIX11) -- On the same day that a woman fell to her death riding between subway cars, three thrill-seeking children took an even wilder risk -- clinging to the outside of a moving train.

Sean Futterman, a real-estate broker in Manhattan, snapped this photo of three children with backpacks hanging on to the back of an uptown express train pulling out of the 96th street station on the Upper West Side Monday about 6 p.m. They were reportedly on the back of either the Nos. 2, 3 or 5 trains. Futterman originally shared the photo with West Side Rag, which broke the story.

Futterman said he, and several other people, were yelling at the kids to jump off. He said no police officers were in the station at the time. The kids then laughed and continued cursing as the train pulled away.

After the photo was posted, many viewers claimed to see an image of a skull beneath the train. Futterman said he noticed something strange underneath the subway car, but thought it could just be a trick of the light.

This photo, originally published by West Side Rag, was taken by straphanger Sean Futterman on Monday. A creepy image beneath the children caught the public's attention as well..

Subway surfing is a dangerous and often fatal sport -- more than a dozen people have died this way since the late 1980s, and dozens more were injured.

Parents are urged to remind their children that stunts such as these often end in death.

After seeing the photo, MTA official Kevin Ortiz had one response: "stupidity knows no bounds."

Earlier in the day, a Bronx woman trying to walk between subway cars plunged to her death on the No. 1 train in Inwood.