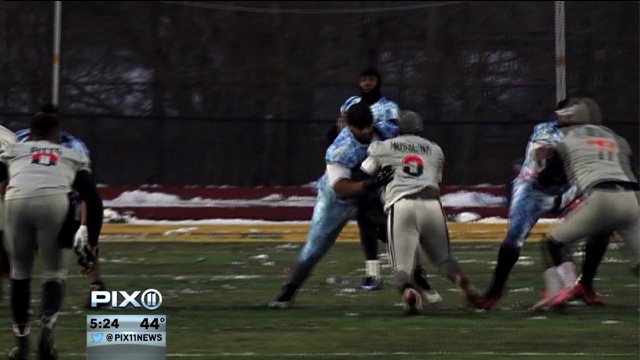 It`s a football league where they play for the love of the game.

NEW JERSEY (PIX11) -- It's a football league where they play for the love of the game -- and they do it without pads.

"This style of game: no pads, tackle, full contact, it makes everybody look twice," said Ryan DePaul, Co-Founder of the American 7's Football League.  DePaul started the league under a different name about 10 years ago after his football career was cut short by concussions.

"All growing up playing football I felt so comfortable hitting with my head," said DePaul.  "It never hurt."

So in the A7FL, DePaul stripped away the pads and changed the rules to make the game safer. In this 7-on-7 league there are no kickoffs and defenders have to wrap up when they tackle.

"You can't just throw a blind shoulder into a kneecap."

So far it seems to be working.  The A7FL has more than 30 teams across the country, including several in New Jersey.

"It's starting to make sense to people now," said DePaul.  "Removing the helmet, fixing the way that we tackle, is starting to add up to a safer game."

Many players in the league say they actually feel safer without helmets.  Even though the equipment was initially designed to protect players, they now believe it does more harm than good.  An opinion that seems to be gaining in popularity.

"You don't have guys feeling like they're invincible because they have a helmet on," said Defensive End Andrew Levine.

Former NFL stars like Hienz Ward and Troy Aikman, who suffered multiple concussions during their NFL careers,
have also suggested removing helmets could make the game safer. Earlier this month San Fransisco 49ers linebacker Chris Borland retired at the age of 24 because he was worried about the long term impact of head injuries.

But football players didn't always wear pads. So how did we get from macho men to wearing a suit of armor?

Football Historian and Statistician David Neft says it started with the death of several players in the early 1900's.

"Theodore Roosevelt who was president then, and was a big football fan, led a public consciousness effort to make the game safer," said Neft.

The improvements started with padded legs and shoulders... but helmets weren't required until the 1940's.

"It was a leather helmet, it had no facemask, and in a way, in terms of head injuries, that was better because the players all knew that their head and face was vulnerable," said Neft.

But when the plastic helmet was introduced in the 1950's players thought they were invincible and changed the way they tackled.

So I asked Neft if he thinks removing the helmets is a heady play.

But players, like A7FL's Kareen Moon, say removing the helmet is the only way to make sure players don't use their heads as weapons.
"Everybody thinks about that," said Moon. "Nobody leads with their head in this league."

As a quarterback he's been hit enough to know.