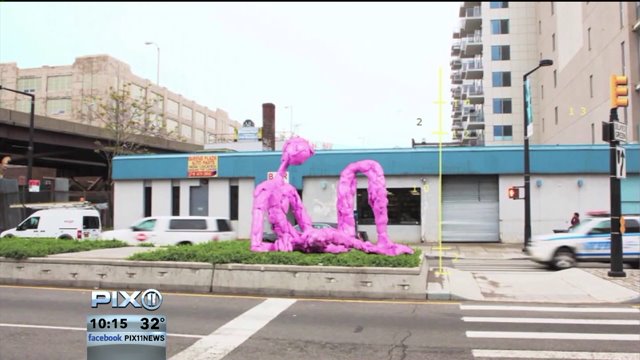 Residents are upset about a new Long Island City sculpture made with public funds.

LONG ISLAND CITY, Queens (PIX11) -- On Wednesday night, it was a packed town hall meeting at MOMA PS1 in Long Island City, Queens. The town hall addressed  many topics including affordable housing for artists, and also a sculpture slated to go up on Jackson Avenue.

One speaker said, "I think it's an amazingly interesting piece of art, I think the location should have been discussed a little more in depth before the decision was made."

According to a spokesperson for city's  Department of Cultural Affairs, the sculpture  is slated to go up on Jackson Avenue near 43rd Avenue in Long Island City, Queens, a public art project with a price tag of $515,000 funded by city capital dollars. The sculpture is called "The Sunbather."

On Wednesday night, Van Bramer hosted the public meeting. The Brooklyn based artist, Ohad Meromi, spoke about the concerns in the Long Island City community about his sculpture.

"It's totally understandable that it's outside and people have opinions and this is public money, and I'm fully respectful of the fact that people might think differently," said Ohad Meromi.

According to a statement from the city's Department of Cultural Affairs:

"The City’s Percent for Art process has robust public input built into the current law, engaging community boards, City Council members, borough presidents, and local groups in the artist selection. The Jackson Avenue commission is still in the midst of this review process, and will go before the Public Design Commission for final approval later this year. The initial proposal was presented to Queens Community Board 2 late last year, and tonight’s cultural town hall meeting is one more opportunity for the public to provide feedback on this and other issues relevant to the Long Island City community."