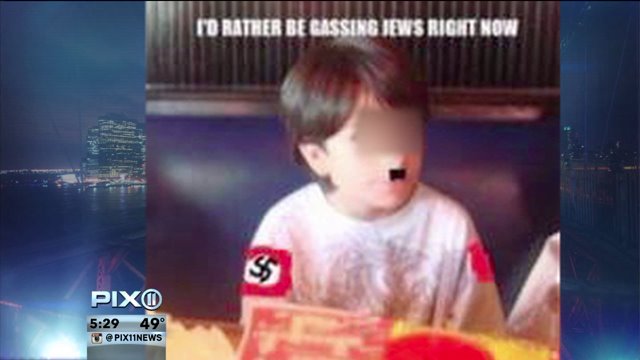 The image was not posted by a student, officials say.

GREAT NECK, N.Y. (PIX11) -- A 'anti-semitic' photo posted to a private Facebook page for students is outraging parents in the community.

The altered photo depicts a child with an Adolph Hitler mustache, wearing a red swastika armband. The caption reads, "I'd rather be gassing Jews right now." The page is designated for Great Neck South High School’s freshman class. The post was removed from the social media page on Sunday.

The page is a "closed group" of more than 200 members just for the freshman class of Great Neck South.

"The school district became aware of a reprehensible and clearly anti-Semitic Facebook posting on Sunday afternoon," according to a statement released by the Great Neck school district. "To be clear, the Facebook page in question was not a school sponsored or supported page; it was one to which a number of our students subscribe."

On Monday, the person who made the posting was identified and the school system says the student does not attend Great Neck South. They have not revealed where the student attends school, but say they were contacted and will decide a suitable punishment.

The school system says they will "continue to use education as its means to eliminate these hateful statements, and we will re-double our efforts by planning a program for students and their parents to discuss this issue and do our part to end this hate and foster greater understanding.

The Anti-Defamation League (ADL) expressed their alarm to the offensive altered photo that appeared on the  Facebook page.

“We were alarmed to see this outrageous, anti-Semitic image and we are pleased the school is taking this troubling incident seriously,” said Evan R. Bernstein, ADL New York Regional Director. “Our hope is that the high school’s administrators will take tangible steps to confront the situation, and we stand ready to offer our assistance and resources to Great Neck South so that its students will never have to be subjected to anti-Semitic harassment or any type of bullying online or in the classroom.”