Tenants angry at landlord for heatless winters protest outside his home 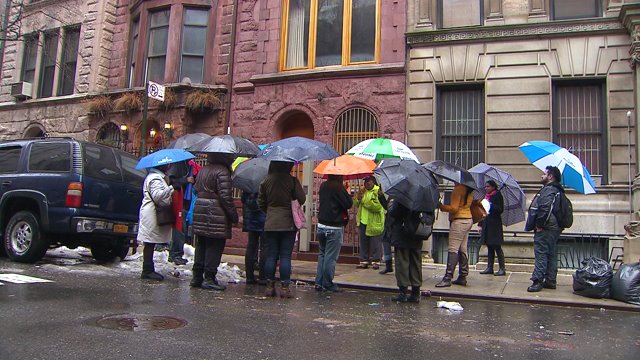 Enough is enough! Ellyn Marks spoke to tenants protesting the lack of heat in their apartment building in front of their landlord`s Upper West Side home.

UPPER WEST SIDE, Manhattan (PIX11) -- Spring may be around the corner, but all a group of tenants could think about on Saturday, was the long frigid winter they endured with only sporadic heat.

The mostly rent stabilized tenants came in from Brooklyn to protest in front of their landlord’s gated townhouse on Manhattan’s Upper West Side.

“It’s to the point where tenants are forced to pay triple the amount on their Con Ed bill, to run their space heaters, just because it’s cold,” said Tiara McLaughlin from the Pratt Area Community Council.

“I’ve been working with this building since 2013.  We’re still fighting the same fight.”

The heat deprived residents live at 930 and 940 Prospect Place in Crown Heights—two adjoining buildings owned by Miller.  He’s been on the public advocate’s watch list of worst landlords, for violations on other buildings he has in the Bronx.

Vernaline McFarlane has been in and out of housing court with other tenants who sued Miller more than a year ago over the heat issue which still hasn’t been resolved.

Miller’s management realty company bought the buildings out of foreclosure in 2012.  Since then, tenants claimed they’ve not only been subjected to no heat, but also to harassment driven by gentrification.

“It’s a prime location.  It’s Crown Heights.  It’s up and coming,” said McLaughlin.  “He wants to raise the rent.  He wants to get them out so he could triple or quadruple the rent.”

“He offered me a buyout, one year rent free, and I told him ‘I’m not leaving.’  Since then the harassment has gotten more and more,” said McFarlane.

It’s not clear if Miller was at his townhouse on Saturday, when protestors took their fight to his doorstep.

PIX11 News could not reach Miller or his attorney, Todd Rothenberg, for comments on the continuing allegations.