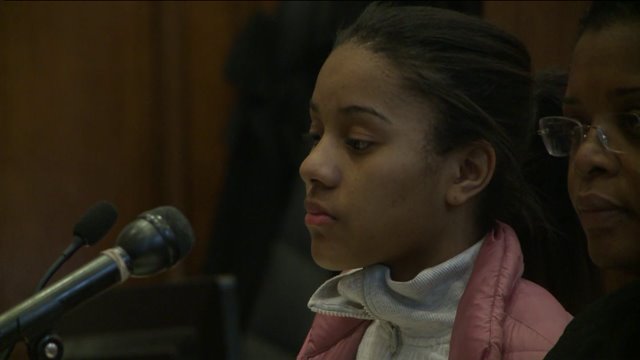 Five of the six girls wanted for a brutal beatdown in a Brooklyn McDonald`s are now in custody.

FLATBUSH, Brooklyn (PIX11) -- 17-year-old Tilani Marshall stood quietly and without expression as she became the second Brooklyn teen charged as an adult in what prosecutors call a gang assault.

"This was not a spontaneous fight but a premeditated assault that had been simmering for months," Assistant District Attorney Jordan Rossman told the judge.

The cellphone video posted on YouTube shows a group of young women attacking a 15-year-old girl while dozens watched, some even cheering. It quickly went viral.

All six girls involved in the attack as well as the victim are students at Erasmus Hall High School on Flatbush Avenue right near the McDonald's where the beat down took place.

"I have looked at the video she's not in it," lawyer Audrey Thomas told PIX11 after her client's arraignment.

Another suspect said to be seen in Mcdonald's beat down video, a 14-year-old girl was stopped by police in Atlanta as she allegedly tried to board a plane bound for Jamaica with her mother. She has yet to be arraigned here in Brooklyn.

The lawyer for Tilani Marshall says the entire family is cooperating with law enforcement.

"The grandmother is very shaken up, the mother is shaken up and the father is trying to be strong," Thomas said. "My client has been crying ever since police told her mother they were looking for her."