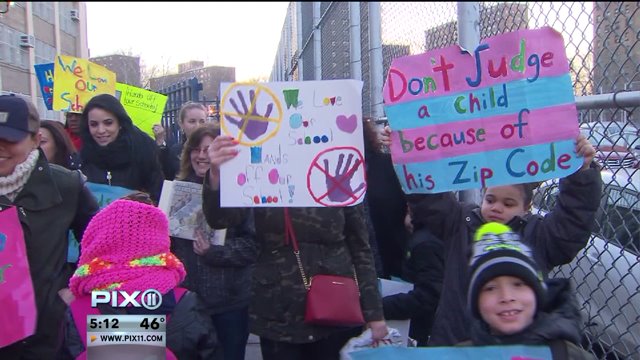 Parents, teachers and students are speaking out against Gov. Cuomo`s proposal for teacher evaluations.

The show were signs made by kids as well as their parents attacking Governor Andrew Cuomo.

The tell was a chant by children and their parents with the simple yet stern message that, "Our school is not for sale."

This is all part of the battle by two sides over the testing and essentially grading the teachers themselves as a result of student performances on tests.

Wendy Kuglman, a parent, says this should be more about providing funds and assistance rather than the state campaigning for testing: "I'm with the teachers and the schools. I think that public schools need to be supported and that Cuomo need to think seriously about supporting the public schools."

A spokesperson for Governor Cuomo says this is fighting to reform a system that has condemned 250,000 children to failing schools over the last 10 years.

Daniel Dromm, the Chair of the NYC Council Committee on Education, told PIX 11 News that this is Albany embracing past failures instead of the innovative measures being pushed at nearly 100 renewable schools around the city,

"I think that Albany is relying on failed policies from the past. These are new policies. These are interesting educational ideas that we have. I think that there is a great difference because the policies we have here in the city, especially in regard to renewal schools, comes from educators."

Meanwhile, city council-member Alan Maisel was the one who unleashed the fiercest verbal jabs directed at the Governor, "It is a power grab on a part of the Governor."

Maisel, is a former assistant principal and a democrat, who criticized the Governor for not taking action under the Bloomberg administration and then took it a step further by comparing Governor Cuomo to one of the most controversial Republican and anti-union Governors in the nation.