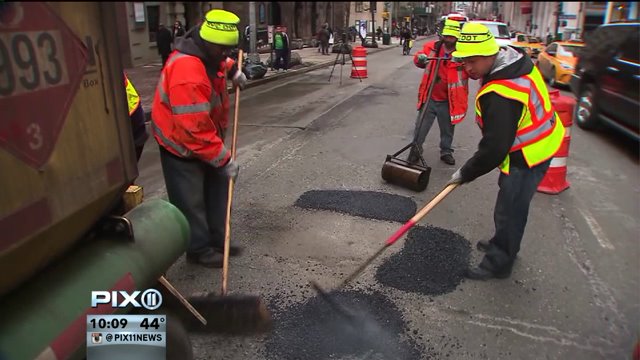 In Brooklyn near Nevins and Pacific streets, we found a pothole, and many others throughout several boroughs during our travels on Tuesday.

NEW YORK (PIX11) -- In Brooklyn near Nevins and Pacific streets, we found a pothole, and many others throughout several boroughs during our travels on Tuesday.

We also saw potholes on 6th Avenue and West 8th Street in Manhattan.  According to DOT officials, 126,000 potholes have been repaired as of Monday citywide.

DOT has up to 50 crews out in any 24-hour period, and according to DOT officials, they not only repairs locations reported to them but also other potholes encountered in between.

According to NYC DOT officials,  if residents see a pothole, they should report it immediately by calling 311 or by visiting nyc.gov. DOT officials say people can file a claim with the City Comptroller if they believe a vehicle was damaged due to a road defect.