Parents may be to blame for narcissistic kids, study finds 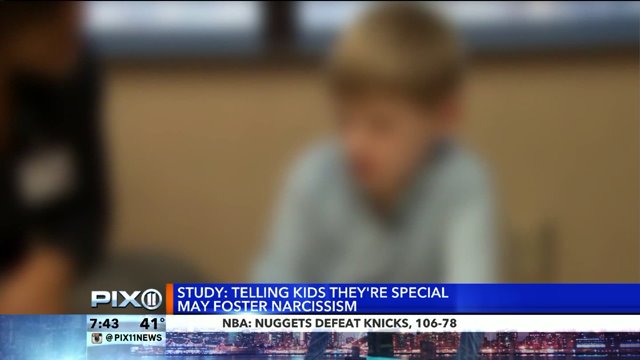 Editor's note: Kelly Wallace is CNN's digital correspondent and editor-at-large covering family, career and life. Read her other columns and follow her reports at CNN Parents and on Twitter.

(CNN) -- Everyone knows a narcissist -- or two or three or four. We may work with one or be married to one (not true in my case, just for the record!) or have grown up with one. But are we raising one?

We could be, according to a new study, which found that children whose parents overvalued them were more likely to develop narcissistic traits, such as superiority and entitlement.

What exactly does it mean to "overvalue" children, asks this reporter and mom of two who wants to make sure her love and devotion to her daughters, ages 7 and 8, isn't going to lead to unintended consequences?

For answers, I called up Eddie Brummelman, one of the study's co-authors and a postdoctoral researcher at the Research Institute of Child Development and Education at the University of Amsterdam.

Brummelman said he and his fellow researchers asked parents questions such as whether they think their child is more special than others or deserves something extra in life -- questions they determined in a previous study could assess and rate overvaluation.

They also asked parents how smart they thought their children were and then measured the children's actual IQs.

"And what we found was that parents who overvalue, they think their child is very smart but in reality, the child isn't smarter than others," said Brummelman, who did the research for the study while at Utrecht University in the Netherlands along with researchers from the University of Southampton in England and Ohio State University

Finally, the researchers made up book titles such as "The Tale of Benson Bunny" and names of newsmakers such as "Queen Alberta" and asked the parents if their children knew them.

Lo and behold, the parents who overvalued their kids said their children were familiar with things -- such as books or people -- that didn't even exist.

The study involved 565 children in the Netherlands between the ages of 7 and 12, since those are the years when children, the research shows, are able to evaluate themselves as compared to others.

"You not only think you're great but you think you are better than others," said Brummelman.

Is narcissism a bad quality for kids?

While many of us might think narcissists are simply an annoyance, narcissistic behavior in children can lead to aggression and larger problems, he said.

"It's a very young field of research but what we do know is that narcissistic children ... feel more entitled than others and they want to be admired by others," said Brummelman. "When they feel they don't get the admiration they want, when they are humiliated or when they are rejected, they tend to lash out aggressively, so it predicts provoked aggression."

Narcissistic children are also prone to experience emotional extremes when they are praised or not praised, and those who also have low self-esteem could suffer from anxiety and depression, he added.

"I also know there are people who claim that narcissism also has a sunny side but there's much less evidence consistent with that view."

But how does one differentiate between narcissism and self-esteem in children? If your child thinks he or she is special, does that make him or her a narcissist or just confident?

While the study found that parents who overvalued their kids could be hurting them in the end, it found that children who feel warmth from their parents were more likely to have a higher self-esteem.

"We found that it was not how much parents felt they were warm but how much children perceived their parents to be warm," said the researcher and study co-author.

What's the message for parents?

Brummelman said an important and crucial question for future studies is whether we can reduce narcissism levels in children and increase levels of self-esteem by "teaching parents to be warm and affectionate without telling children they are better than others and without conveying to children that they are more entitled than others."

I know so many of you reading this might be thinking: great, yet another study blaming me for what happens to my children. I can relate, but what's important here is that many of us might be doing things that we think are best for our children, but really aren't.

"It's well-intentioned parenting always," said Brummelman. "Parents always want the best for their child, but sometimes they use practices that without their knowing backfire.

"That's why it's important to study these topics because intuition ... doesn't always know what the impact is."