It’s a “G” Thing: Gama Droiville shares his story one year after being shot 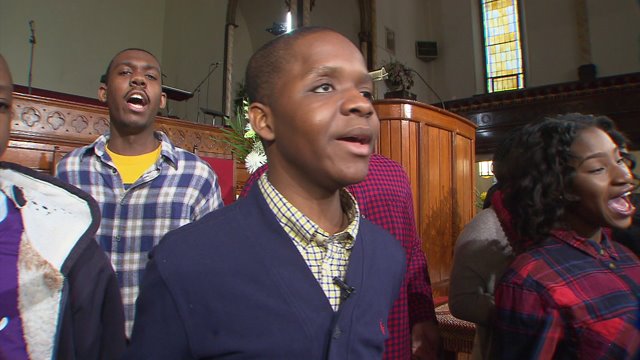 In this exclusive It`s a "G Thing, PIX11`s Mr. G sits down with Gama Droiville to talk about how he`s doing one year after being shot twice in the head.

The church choir at the French Speaking Baptist Church of Brooklyn is an escape for Gama Droiville.

It's where he feels safe, where he can be himself.

“Before the accident, what kind of kid were you?" I asked Gama. "I was an enjoyable kid, smiled more often.”

The 14-year-old got caught in the crossfire of a gunfight while waiting for the bus near Flatbush Avenue and Beverly Road in Brooklyn shortly before noon on April 14. He was shot twice, once in the eye and once in the back of the head. Doctors said it's a miracle he's still alive.

He said he's only been feeling like this for a few weeks.

Gama has good days and bad ones, a side effect of this whole ordeal. He was operated on at Kings County Hospital for the initial trauma then transferred to Northshore-LIJ.

“It happened really quickly, they wanted to see him," John Elefterakis, Gama's lawyer and family friend said. "They offered to donate all of the treatments, which turned out to be multiple surgeries.”

"It was taking out the eyeball to create space for the prosthesis," Gama explained.

Gama is now blind in his right eye.

“What are the adjustments you’ve had to make in terms of seeing?" I asked him. "Moving my head around more often to look over my right shoulder [and] I used to lose balance, so I would get dizzy and just fall but then I gained strength and became healthier."

His family helps  him through the rough times.  Gama lives with his aunt, uncle and cousins.

“He’s the best cousin I ever had," Dudley Philogene, Gama's cousin, said.

“I love him and I really thank God that he’s alive,” Maureen Philogene, Gama's cousin, added.

“We’ve been through a lot,” Jimmy Marcel, Gama's uncle, said. "Before the accident he could take the bus, come home by himself, but because that happened we never let him, somebody has to be there.”

But Gama believes everything that's happened is a blessing.

“I’m blessed by meeting a lot of people I thought I’d have never met before,” he said.

WEB EXTRA: Who are the 3 people Gama Droiville wants to meet

He also feels this tragedy has given him an opportunity to create change.

“Just to sit down and have a talk about gun situations, to get stricter laws and more background checks,” Gama said. "This little man is very serious about getting guns off the streets.”

Even with everything that's happened, Gama has had trouble making a lot of friends but deep down he is still like most teenagers, he loves music!

"All the pop music, it gets me going," Gama said. "[My favorites are] Bruno Mars, Ariana Grande and Taylor Swift.”

WEB EXTRA: Gama Droiville is quite the fashionisto

“In your eyes, how is he doing?" I asked Elefterakis. "It’s all relative, he’s doing great for a young boy who got shot in the eye, but he definitely has a way to come.”

Gama Droiville is now focusing on the future.

But what he wants everyone to take a way from his story is that he believes God has a plan for him and he hopes to inspire others going through trying times.

“Whatever situation you’re in, just have faith and believe you will get out.”