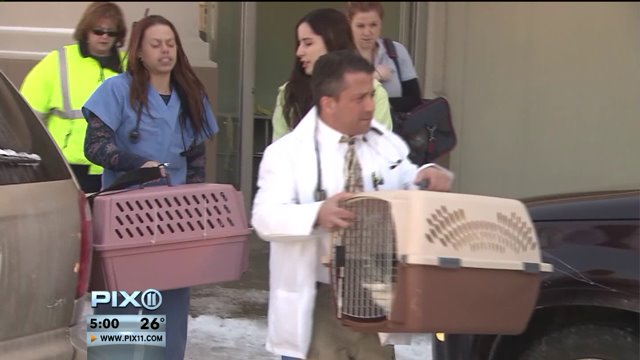 Police in Paramus said there was a blast about noon at Oradell Animal Hospital, located at 580 Winters Ave.

Officials say workers were repairing an MRI machine when it exploded. Three people were injured, and one is in critical condition, officials with Paramus Fire Department said. There were reportedly 60 animals inside the hospital at the time of the explosion and all were evacuated to safety.

The hospital is open and staffed 24 hours a day, 365 days a year, according to its website, which described the facility as "one of the largest technologically advanced, state-of-the-art veterinary facilities in the world."

Little Maddie was inside the Oradell Animal Hospital when an explosion rocked the building. All pets ok @PIX11News pic.twitter.com/7ADGbOfAAp

PIX11’s Mike Graham and Dan Mannarino contributed to this report.