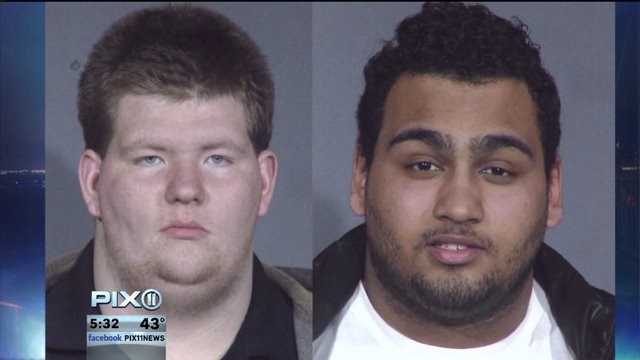 A pair of volunteer police officers are accused of attacking a delivery man inside a Manhattan apartment then abandoning him handcuffed in a stairwell after they allegedly stole his food, wallet and cellphone, NYPD said Wednesday.

EAST HARLEM, N.Y. (PIX11) -- A pair of volunteer police officers are accused of attacking a delivery man inside a Manhattan apartment then abandoning him handcuffed in a stairwell after they allegedly stole his food, wallet and cellphone, NYPD said Wednesday.

Auxiliary officers are volunteers with the NYPD who do not carry guns and don’t have the power to make arrests. However, they do wear the same uniforms as NYPD officers though their badges look different -- like stars.

The night of the alleged attack, James Kiernan and Jordan Martinez, both 22 and from Manhattan, displayed police shields and walked with the delivery man into the elevator and up to the 14th floor, investigators said.

NYPD auxiliary officers James Kiernan, left, and Jordan Martinez are suspected of robbing a delivery man in East Harlem and leaving him handcuffed and helpless in a stairwell. (Photo: NYPD)

The delivery man knocked on the door of the listed apartment but the resident said they didn’t order any food. So the delivery man walked back to the elevator to leave. That’s when he was met allegedly by Kiernan and Martinez and attacked, police said.

The suspects allegedly forced the victim out of the levator, handcuffed his wrists behind his back and stole $180, his wallet and an iPhone 4S, police said. Then they ran away, leaving the victim handcuffed in a stairwell.

Eventually, officers arrived and unhandcuffed the victim. The incident is under investigation by the department’s Internal Affairs Bureau’s Police Impersonation Unit.

Investigators suspect there may be more victims. Anyone with information is urged to call NYPD’s Internal Affairs Bureau at 212-741-8401 or the Crime Stoppers Hotline at 800-577-TIPS.