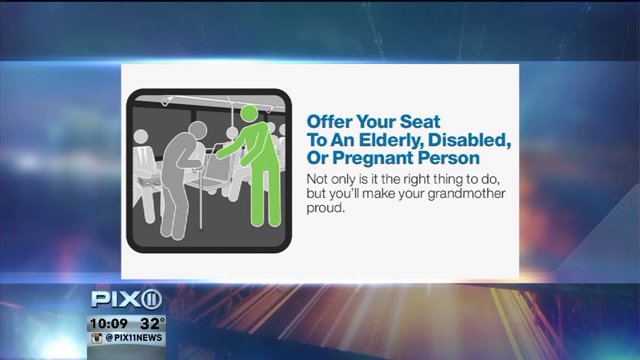 First they tackled the subways. Now, the MTA is taking on bus etiquette.

NEW YORK (PIX11) -- Could you be more courteous on the bus? The MTA is rolling out a new campaign this week, asking New Yorkers to step things up a bit.

This follows the MTA's subway campaign. The one telling riders to refrain from dancing on subway car poles or telling men not to spread their legs.
This bus sign rollout may not be as quirky, but the MTA says it's just as important. It will help make it a faster and more pleasant experience for the 2.5 million people who take the bus every day.

"I think it's a good thing," rider Mary Greenburg said. "I think people have to learn to be nice to each other and be respectful." One sign reminds people to give up their seats to the elderly, disabled or pregnant. Noting it would "make your grandmother proud."

Bus rider Pat Mollet said that's something more people need to do. "My friend says that she's had a lot of problems with young people just sitting there and they don't offer her the seat. Sometimes she asks and they don't let her sit down," Mollet said.

The signs are expected to be rolled out on all 4,600 local buses this week. And according to the MTA, the commuter railroads will be next.