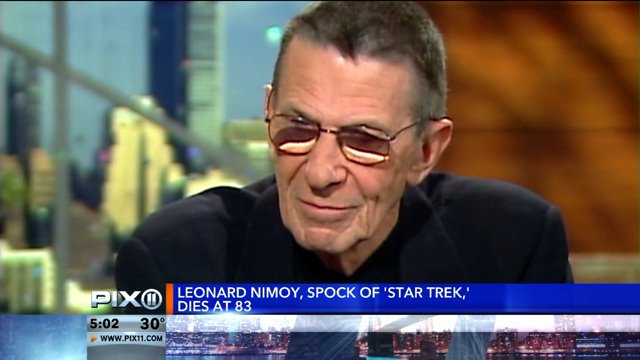 The press release announcing the arrival of “Star Trek” on WPIX.

In the 1980s, late night television in New York for so many viewers meant Channel 11. Who needed the late news and Johnny Carson when you could enjoy “The Odd Couple” at 11 p.m., “The Honeymooners” at 11:30 p.m. and — of course — “Star Trek” at midnight?

Memories of the many decades that WPIX aired “Star Trek” were stirred Friday by the death of Leonard Nimoy, who played Mr. Spock on the show, which aired for only three seasons on NBC. Only 79 episodes were produced.

Those episodes were played hundreds of times on WPIX starting on September 10,  1969. WPIX-TV excitedly announced in a news release that it was adding the science-fiction show to its lineup that fall in this news release, and that would prove to be a fateful decision for the station — in a very good way.

On NBC, “Star Trek” was a ratings laggard, but always enjoyed a devoted, passionate audience. When Paramount Television released the show for syndication in the fall of 1969, the show exploded in popularity, moving at warp speed from a curiosity to a sensation.

For WPIX, adding “Star Trek” quickly became a ratings bonanza — and viewers couldn’t get enough of the show. Indeed, WPIX, as the station showing “Star Trek” in the nation’s biggest TV market, and with a reach later amplified by cable and satellite, played a part in the future success of the franchise, which led to conventions, a cartoon, multiple Hollywood film releases and many TV spinoffs. The show remains an inescapable and essential part of American culture.

At WPIX, we played the episodes so many times that the film prints were a scratchy mess by the time the station finally started airing  pristine master transfers on tape in the mid 1980s. But those beat-up prints of yore were a testament to the show’s popularity on PIX.

The show was shown for much of the 1970s in the early evenings, where it drew a wide audience of entranced school kids, their parents and legions of science-fiction fans.

But in the beginning, just months after the Peacock Network canned the show despite an outcry, PIX was hoping "Star Trek" would be a hit, just like the five-day-a-week "stripping" of the much older and more popular "I Love Lucy" proved to be for WNEW-TV Channel 5 starting in 1967, a point made by  Roberta Pearson in her book "Star Trek and American Television."

The move to pick up a "cult" show with a core audience of young, male and highly engaged viewers was a smart one, and it turned out to be a memorable ride for PIX and viewers alike.

Leonard Nimoy was a big part of that ride, and we mourn his death and celebrate his life.

From the original 1969 release:

From the original 1969 release: