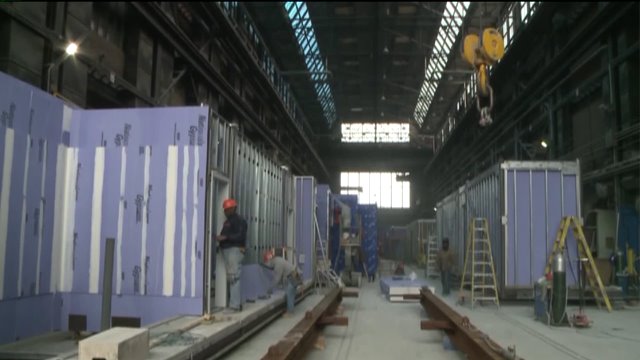 They`re whole apartments barely bigger than the closets in some homes.

KIPS BAY, Manhattan (PIX11) -- They are apartments barely larger than the walk-in closets in some homes, so why is the rent up to $3,000 per month?  That's the question that the developer of MyMicroNY has to answer as it builds the city's first micro-apartment building.  Its units are tiny, but it's promising maximum satisfaction that may actually be more affordable than first meets the eye.

The apartments range in size from 270 square feet to 370 square feet, including a galley kitchen and separate bathroom in each unit.  Their small footprint is meant to help address a shortage of housing in New York, particularly in Manhattan.

The building's primary architect, Mimi Hoang of n-Architects, said that if her firm was required to provide small floor space, "We had to give something back," she told PIX11 News.  "What we gave back is height."

Each unit has nearly 10-foot tall ceilings, allowing for overhead storage in the kitchen area, as well as a tall closet in most of the units.  They also have unusually tall and wide windows, eight feet tall.

Each apartment also has a juliet balcony, which just about anyone but a New Yorker would call a sliding glass door, with a thick, shatter-proof glass panel 42-inches high preventing anyone -- especially children -- from falling out of the door.  It's designed to allow residents to "interact with the outside," according to Hoang.

The building, which is slated to open in the last few weeks of 2015, will also have a gym, a community room, a bike room, a laundry room, and a community terrace as well as some private terraces, among other amenities, for a competitive price, according to the developer.

"New studios in the area of Kips Bay rent for $3200 month," said Tobias Oriwol, a project director at Monadnock Development.  "We'll be cheaper than that."

However, considering that the median income in New York City is just above $50,000 per year, the market rate apartments in MyMicroNY would eat up a considerable portion of many people's paychecks.  Oriwol said that market rate apartments in the building going up just west of First Avenue near 28th Street would be between $2,000 and $3,000.  "It'll be somewhere in between there," he told PIX11 News.

However, he added, that 40 percent of the apartments, spread throughout the building, will be designated affordable housing units.

"We have units for Section 8," he said, which will be available by application and lottery, as will be apartments whose monthly rental amount will be pegged at 80- or 120-percent of the median household income for the Kips Bay neighborhood, where the building's foundation and basic structure are being completed.  Eighty  percent of local median income's rent, said Oriwol, "Is $950 a month, about."

The 55 units are all modular, meaning that each one is fully built, all the way down to its fixtures, ahead of time.  Their assembly site is in the Brooklyn Navy Yard.  In June, they'll be transported by truck to the construction site in Kips Bay, where they'll be stacked, literally, by crane, onto one another, like a three-dimensional jigsaw puzzle.

Then, a brick facade will be laid over the modular apartments, and their plumbing and other utilities, which are already installed in each unit, will be connected to one another on site.  The full structure should be completed by the end of the year.

The architect said she's hoping that each resident will feel "happy that you have your own apartment in New York City, and you don't have to suffer through living in an apartment that's illegally subdivided and has no windows."

The fact that MyMicroNY has a large minority of below-market rental units and is densely and vertically developed, makes it consistent with Mayor Bill de Blasio's call for 200,000 affordable units to be built in a decade, even though it was the Bloomberg Administration that approved the building.

It was allowed an exemption to the city's zoning laws, which require that apartments be no smaller than 400 square feet.  A similar micro-unit apartment has been built in Seattle, with rents starting at $560.

While the Section 8 apartments in the building may end up renting in that range, the architect said that actually fitting into them, or any apartment in the building, could end up with a pricetag that's not necessarily small.

"A Murphy bed that folds," said Hoang, in recommending how to furnish a unit.  "One of those convertible furnitures is a necessity."

She recommended furniture from Resource,  a company that specializes in maximizing space.  Much of the company's Italian made furniture tends to be priced higher than most middle priced retailers.