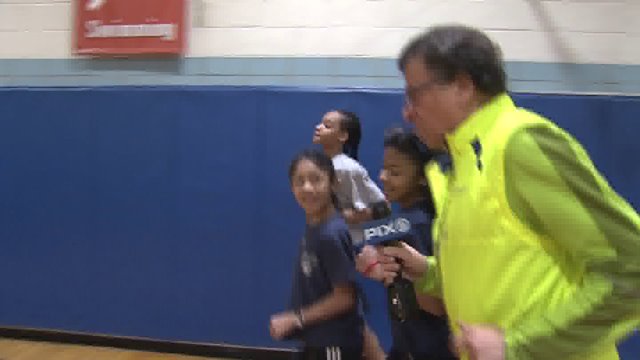 In this week`s It`s a "G" Thing, PIX11`s Mr. G visits a school taking advanatge of a very special program helping kids get up and moving.

"I feel really good and positive about myself!” Kiara, a student, said.

But this isn't your typical PE class, it's part of the New York Road Runners program, Mighty Milers.

"We serve about 80, 000 kids in the program this year who have collectively run over two and a half million miles,” Cliff Sperber, Vice President of New York Road Runners' Youth and Community Services division, said. “The point of the program is to get kids moving, get them running, get them walking, really improve their fitness, fight obesity and build character”

And here in East Harlem exercise is extra important, nearly 40% of kids are overweight or obese.

This school is seeing the results.

“A lot of students have lost a lot of weight,” Maisha Cadet-Duvall, gym teacher, said.

"[Running] keeps me healthy and active,” one student said.

“It helps me focus and get all the energy out so I can stay focused on my classes.” Nayeli, a student, explained.

But the effects of this running program reach further.

For Ivette Benitez, Mighty Milers helped her in even more ways. Not only did she make new friends, and compete in dozens of races and half marathons, running helped Ivette get past life's toughest challenges.

“I was in my senior year of high school and I lost my godfather," Benitez remembered. "I was just ready to drop out but then I had remembered throughout my days of
running, it taught me discipline, it taught me respect so it was just like keep going forward."

That discipline along with the help of the Road Runners, Ivette got a scholarships to St. Francis, becoming the first in her family to go to college. She's currently training for her next half marathon.

Just like Benitez, all the students currently participating are hoping to continue being involved with Mighty Milers and also spread the word.

“[I want] to help other kids join and tell them how positive the Mighty Milers is,” Jewel said.