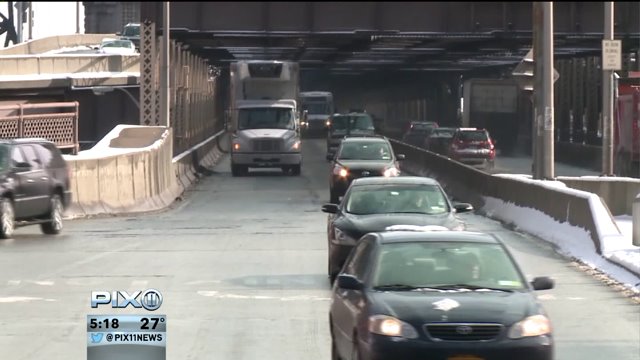 The MTA says the proposal will offset costs on other bridges.

NEW YORK (PIX11)-- Right now, it costs nothing to cross East River bridges below 60th Street into Manhattan. Under a proposal formally introduced Tuesday morning, that would change, but the designers of the proposal say they have support for their plan because its benefits to commuters far outweigh the cost of added tolls.

Currently, the bridges connecting Manhattan and its neighboring boroughs across the East River -- the Brooklyn, Manhattan, Williamsburg and Ed Koch Queensboro Bridges -- are free of charge in both directions. Meanwhile, nine other inter-city crossings -- the Verrazano Narrows, RFK-Triboro, Throgs Neck, Bronx-Whitestone, Henry Hudson, Cross Bay and Marine Park Bridges, and the Queens-Midtown and Hugh Carey Battery Tunnels -- have tolls, as high as $16.00 cash, starting next month.

That contrast between high-cost tolls on some crossings, and no payment at all across others, the transportation reform group MOVE NY says it's trying to balance.

"One of the biggest obstacles," said "Gridlock Sam" Schwartz, "is if we solely call this plan 'Tolls on the East River Bridges."

Schwartz, a former New York City transportation commissioner who's currently an in-demand traffic consultant, is one of the principal designers of the proposal called the MOVE NY Fair Plan. He described it as "lowering the tolls on so many facilities that should not have had their tolls increase year after year."

The MOVE NY Fair Plan would also bring back the concept of congestion pricing, or charging vehicles to drive below 60th Street.

"Of course there is an element of traffic planning" in the plan, said MOVE NY campaign director Alex Matthiessen. He added that his proposal is different from the congestion pricing plan put forth by Mayor Michael Bloomberg in 2008.

"Under the Bloomberg plan," Matthiessen told PIX11 News, "if you were a driver paying that toll... you were getting nothing."

By contrast, he said, "Under this [new] plan... [drivers] get major improvements to roads and bridges they rely on every single day."

City Councilmember Mark Weprin, a Democrat from Queens, was a state assemblyman when Bloomberg had proposed congestion pricing seven years ago. At the time, Weprin was one of the plan's biggest critics. In sharp contrast, he favors the new plan so strongly, he attended its official rollout in a show of support.

Weprin spoke with PIX11 News after the morning news conference. "Under this plan," he said, his constituents are "going to get benefits that nobody is talking about," including more frequent buses, select bus service and more frequent LIRR stops. "Things that will make it better in the transportation system," Weprin said.

Under the new plan, existing tolls would drop by at least 18 percent for cash payments and up to 48 percent for EZPass payments. Some drivers could see their tolls lower by $5.00, according to Schwartz.

EZPass use would enable vehicles to be monitored throughout Manhattan, below 60th Street, through a system of cameras and electronic readers similar to one in place now in Central London that limits traffic in that British capital's center city.

The EZPass monitoring would also make it possible for the system to charge commercial vehicles for just one roundtrip toll per day.

It would also generate $1.5 billion more per year for area transportation, according to Schwartz. He said that three-fourths of that revenue would go toward improving commuter trains, subways and buses.

Commuter advocacy group The Straphangers Campaign approves of the MOVE NY Fair Plan, but warns that it could crowd trains and buses even more than they are currently.

In an unscientific survey of drivers headed into the Queens Midtown Tunnel, where there's a toll, and the Ed Koch Bridge, where there's no toll, the result were 3 to 1 in favor of the new plan.

"I'm with it 100 percent," said Jeffrey Hyder, a yellow cab driver. He said he could not understand how at some river crossings, a payment is required, but not at others.

"We're paying tolls elsewhere," said a woman just before heading across the Ed Koch Bridge. "Why should I have to pay?"

Yet another Ed Koch Bridge driver disagreed. "I do favor it," he told PIX11 News. "The reason is that it helps us rebuild roads, and everything gets much easier."

Another driver who said she uses a variety of crossings told PIX11 News that while she was not in favor of paying additional tolls, "Whatever is good for the greatest number [of people], I'll go along with it."

In order for the MOVE NY proposal to become reality, it has to pass the state legislature. When asked about the prospect of that happening, all of the officials involved with the plan's design told PIX11 News that the Thursday morning rollout was meant to open dialogue about alternatives to the current situation.

If the MOVE NY Fair Plan is approved in Albany, Matthiessen said he would predict it happening perhaps three years from now.