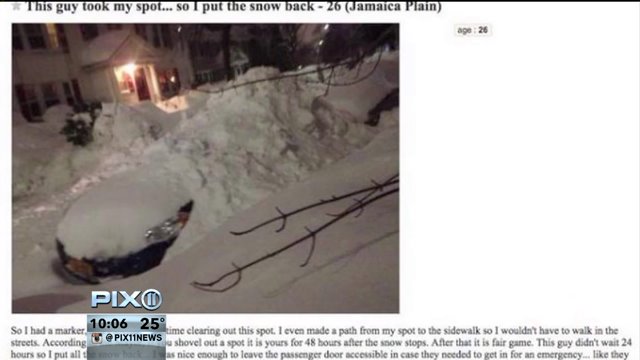 From the very first scrape, Julio Velasquez says he knows the time and effort it takes to clear a path toward his own snow covered minivan is more of a community effort.

QUEENS (PIX11) -- From the very first scrape, Julio Velasquez says he knows the time and effort it takes to clear a path toward his own snow covered minivan is more of a community effort.

“How you gonna save your space? Other people need it,” said Velasquez.

In short, even if you spend five hours digging out that treasured street space in front of your home, New Yorkers should not expect that space to be available to them when they get home that evening.

The same can’t be said if you live in Boston, or any one of a number of cities where the so called “Dibs” rule is in full effect.

Take a look at this Boston Craigslist poster’s photo, showing a car that was left in a space he spent hours digging out.

In retaliation, the poster dumped all of the snow he removed, back on the intruder’s car.

PIX11's unofficial Boston correspondent, who just also happens to be this reporter’s younger sister, tells us via Skype that “Dibs Parking” is no joke in Bean Town.

“Dibs is serious business. If you spend four hours digging out your spot, and you put a chair, that is your spot for at least forty eight hours. Well, I’ve heard stories about windows smashed, chairs getting broken off on the hoods of cars,” said Dow-Carroll.

In Chicago, city workers preparing for a “Dibs” round up, to collect all of the personal markers; cones, furniture, and the like, off the street

Back here in New York City, the law is clear. Section 4-08 of the city’s parking rule; “Unofficial Reserving of Parking Space," states “It shall be unlawful for any person to reserve or attempt to reserve a parking space, or prevent any vehicle from parking on a public street through his/her presence in the roadway, the use of hand-signals, or by placing any box, can, crate, handcart, dolly or any other device…”

“You can’t do that. You can’t claim a spot in the street. You don’t own the street,” said Gavriil.

“People I remember would try to do that, not just when it snowed, but when they were looking for a spot. Yeah, you can’t get away with that in New York. New Yorkers wouldn’t put up with that,” said Gavriil.